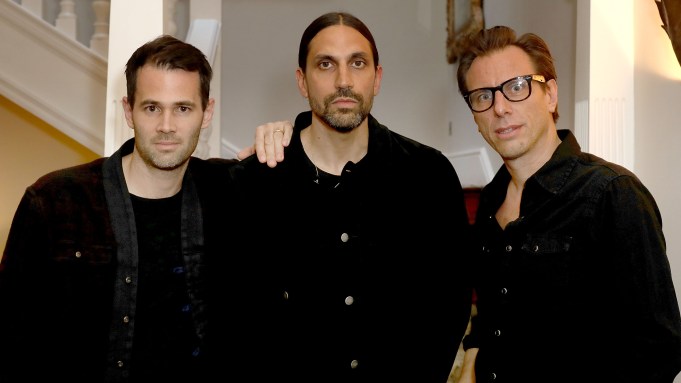 This is Gorham’s first foray into clothing, as the innovator in the artisanal fragrance movement has worked on accessories in the past. The 6-foot-5-inch-tall Byredo founder and former professional basketball player worked with the London-Los Angeles fashion brand on a 20-piece dedicated men’s capsule range titled “Away From His Hands.” The range was inspired by the youth lifestyles of rodeos and ranches as seen in Western references in the form of patchwork denim, leather vests, vintage Ts and paisley scarf linings.

“There was the childhood associations to cowboys,” said Gorham. “That was my immediate connection to denim and it was kind of from my origin. I saw a new subculture and new generation come out through the rodeo scenes. They were young Americans and Latin Americans. As a style, it was a hybrid of classic cowboys and styled with denim and boots combined with sportswear and T-shirts and prints. I fell in love with that as an image. It became the base of the capsule.”

He called the process an organic one as he developed the line with his friends Torstensson and Grede.

Gorham said his approach to clothing was similar to his approach with fragrances but said the turnaround time was much faster. “It goes the same way naturally,” said Gorham. “But, I think the practical and logistic aspect in fashion is so fast….creating ideas and refining them in a short period of time. I had to adjust my mind, because it is quite different what I do actually. Finding something and developing takes a long, long period of time. Giving into human scale and fit, it was kind of a learning curve. I had these amazing resource and themes.”

The Byredo founder said that he is planning to launch a new leather-goods collection next month in Paris, which he said he has been working on for over a year. He hinted at the launch of a new fragrance in the fall as well as a new shop in London. He said that the brand has been great for him and has allowed it to become a vehicle to express himself as it was category specific for a time. “We are opening our own retail shop,” said Gorham. “It allowed me to build a universe. There will be all kinds of unexpected items.”

“What we admire is what he does for fragrance and beauty and it’s similar to our aesthetic,” Torstensson said of Gorham. “Ultimately, we also we admire his personal style. He is one of the few cool guys around. He has an effortless way about him so when we have decided to do some kind of men’s effort and his name popped up straight away.”

He said the capsule collation was “very tight and a functioning concept with great references” and noted that it the best the brand has delivered to date with pieces he said he personally wears all the time.

Torstensson said that the company will hold back on collaborating for the moment and said that the brand plans to kick off big marketing initiatives this summer. While he could not disclose details he indicated that the creative effort will be his “childhood dream come true.”

Peter Dundas, Elisa Sednaoui, Jack Guinness and Amber Anderson were among the guests who attended to show support.

The collection includes denim jeans; denim jackets — including a patchwork style with a paisley lining; denim shirts; graphic T-shirts; a gray hooded jacket, and a black vest. Prices range from 130 pounds, or $168, for a Bronco t-shirt to 1,005 pounds, or $1,300, for a suede jacket. It will be sold at Frame-store.com, Mr Porter and Barneys New York.