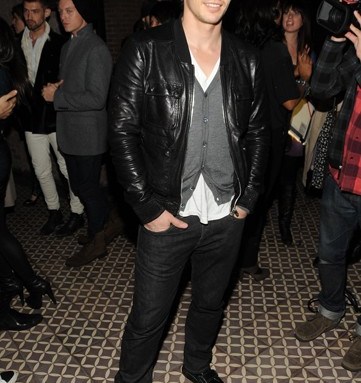 FRANCO-PHILES: Add one more calendar item to James Franco’s very busy 2011. AmfAR said this week that it will honor the actor with its Award of Inspiration at its second annual Inspiration Gala at New York’s Museum of Modern Art on June 14. “We are proud to recognize James Franco for his ongoing commitment to health and human rights, as well as his inspirational cultural contributions to film, art, literature and design,” said Kenneth Cole, chairman of the AIDS charity. In its inaugural outing last year, the men’s style-centric event honored Jean Paul Gaultier and Ricky Martin for their work in the fight against AIDS.

MR. FIX-IT: Karl Lagerfeld is still in touch with his rock ’n’ roll side. From March 1 to 10, Chanel and hip Paris boutique Colette are teaming up for a pop-up store in a former garage that will serve up graffiti-covered handbags, scooter helmets and CDs alongside the spring collections of Chanel, Éres and a selection of young designers. Chanel has also cooked up a collectible doll, bags customized by Chrome Hearts and a camellia-making demo by craftsmen from couture atelier Lemarié. The 2,200-square-foot industrial space at 336-340 Rue Saint-Honoré will boast a nail bar, a cupcake stand and nonstop tunes from Michel Gaubert.

MODEL BEHAVIOR: Katie Holmes is expected front row at today’s Max Mara show. She’s the latest recipient of the company’s Face of the Future Award and is relishing the honor to the hilt. The actress was in a Milan photo studio on Wednesday posing for photographer Giampaolo Sgura in an array of Max Mara’s designs. The fashion editorial will appear in the Italian fashion powerhouse’s in-house magazine, MM.

AUTO TRADER: Given Wednesday’s unveiling of the new Fiat 500 by Gucci, Agnelli heirs Ginevra and Lapo Elkann attended Gucci’s show with Coco Brandolini d’Adda. “What better than joining two Italian icons on the occasion of the 150th anniversary of Italy?” enthused Lapo Elkann, whose advertising agency, Independent Ideas, is in charge of the car’s campaign. Brandolini d’Adda said she was putting the finishing touches on the upcoming issue of Tar magazine, which will feature a cover by U.S. artist Charles Ray. Brandolini d’Adda, who is fashion director of the twice-yearly arts publication, said features would include a spread on the Gstaad home of Setsuko Klossowska de Rola, the widow of painter Balthus, and poems by actor/jack of all trades James Franco.

IT’S NEVER TOO LATE: …for an epiphany. In a brief chat prior to the Gucci show, Ed Filipowski, who over the years has probably seen more collections than any random 10 front-row regulars combined, noted the overall strength of the American shows. When reminded that not everyone agreed, he commented that he still gets frustrated when he genuinely believes a client has been reviewed unfairly. That is, until a recent illumination by his partner, Barneys New York chief executive officer Mark Lee. “I was upset about something I’d read,” Filipowski recalled. “Mark said, ‘You have to accept that this is a subjective industry.’ After 25 years — perspective.”

FASHION FUSION: Donna Karan and photographer Russell James celebrated the opening of the multimedia art project “Nomad Two Worlds” on Tuesday night at Pier 59 Studios West in Santa Monica, drawing Barbra Streisand, Chris and Liam Hemsworth, Lisa Rinna and Estella Warren to celebrate the art of aboriginal people from around the world. Three years ago, Karan partnered her Urban Zen brand with James’ decade-old philanthropic project. Karan wore a hand-dyed Urban Zen cashmere scarf and her ever-present Senegalese prayer beads. Guests at the warehouse space were greeted by Chumash Native Americans and live indigenous music, which made Australian native Chris Hemsworth, whose movie “Thor” is coming out in May, followed by “The Avengers,” feel right at home. Others gazed starstruck at Streisand, who got her own personal tour of the warehouse, was gifted a Native American offering and bought a heart-shaped stone for the Million Hearts for Haiti campaign, exclaiming, “It’s beautiful.”

ROCK THE VOTE: Oscar nominees aren’t the only ones lobbying for awards this season. With the March 11 deadline for voting for the 2011 CFDA awards closing in, a few designers are making their appeals directly and indirectly. Rebecca Minkoff mailed letters highlighting her design career, celebrity followers and annual sales growth. A Kara Ross team member has made a bid for her employer, as has a Marchesa spokeswoman, who reached out for recognition for Georgina Chapman and Keren Craig via e-mail Wednesday. Winners and honorees will be disclosed at a March 16 CFDA party hosted by Diane von Furstenberg and Nadja Swarovski at the DVF studio. Meanwhile, Inez van Lamsweerde and Vinoodh Matadin have been tapped to shoot the awards journal this year.

OPEN-AIR RUNWAY: It looks as though there will be another fashion week — sort of, anyway — under the open skies in Times Square this summer. The New York City International Film Festival is staging its second edition this August, and from Aug. 21 to 28, the organizers of the festival are planning live runway shows on Father Duffy Square on Broadway between 46th and 47th Streets each night. The models will parade down an 86-feet runway in the heart of the city, with the show being projected onto an LED screen used to show the movies that week. “For me, fashion is the silent voice of the film,” Roberto Rizzo, the festival’s founder and chief executive officer said. “It tells you when the movie was done.”