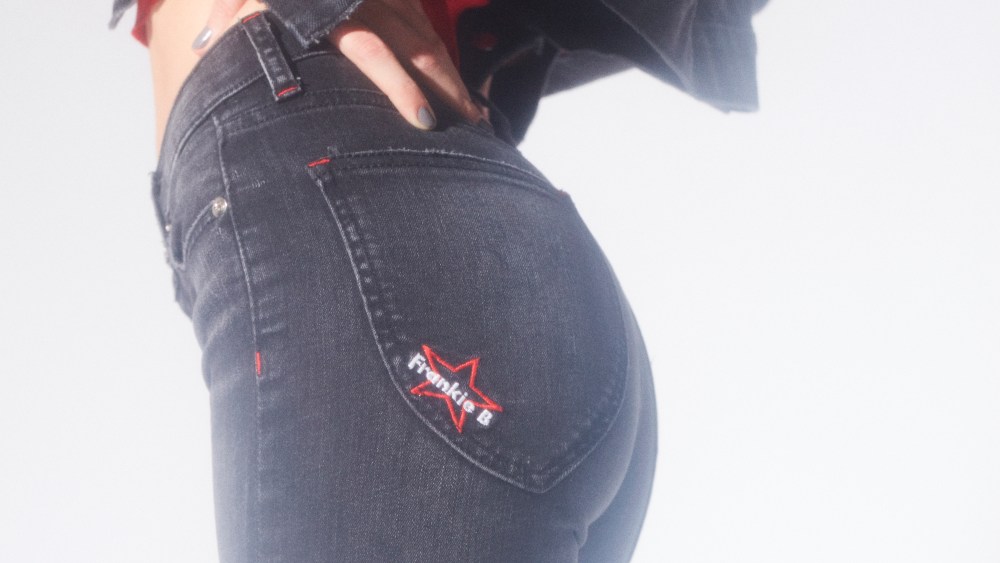 What comes around, does indeed go around. Frankie B, which made its name as the sexy, low-rise L.A. girl jean during the early Aughts premium denim explosion, is back again.

Gone are the three-inch rise, dark stretch denim flares of days past. In their place are fitted high-rise jeans; rhinestone-studded, vintage denim styles with looser waistbands, and cropped trucker jackets.

The original brand, founded by Daniella Clarke in 1999, became a runaway success after launching in Fred Segal and Ron Herman, then cooled with the rise of ath-leisure. In 2015, it was sold to Mek Denim founder and chief executive officer Kevin Chen, who relaunched a contemporary women’s and men’s line called Frankie that year. Chen also retained the rights to the name Frankie B, and this year linked with creative director Alaina Etue of Ambi Studio, along with Ambi founder Lukus Eichmann, to relaunch a denim-centric collection in the same “It” girl spirit as the original.

So far, the brand has been seeded with fashion influencers including Kylie Jenner, Caroline Vreeland, Shea Marie, Danielle Bernstein, Jennifer Grace and Alana Hadid, so it should only be a matter of time, judging from the Instagram posts.

“A lot of people had it back in the day. It’s kind of genius if you put the right spin on a ‘name,'” said Etue, whose creative background includes stints at Reformation, United Denim and Cotton Citizen. “There are so many brands out there; I come from a basics world and saw there was an opportunity. When you are relaunching a name the best way to do it is to be loud and crazy.”

That meant rhinestone embellishments, updated logo sweatshirts, a bright red outer label and other ways to “pop it and put it in your face.” The fitted styles are made with stretch denim, while the rhinestone-studded, drop-waist jeans hail from upcycled vintage denim including Levi’s. The boxy cropped jacket is also non-stretch denim. To round out the collection are coated black denim, white skinny denim, novelty bottoms such as burgundy studded joggers and matching tank tops and a tank dress.

The debut collection, dubbed Drop 001, retails from $78 to $395 exclusively at Elyse Walker stores and online at Forward by Elyse Walker. Walker, Etue and Eichmann toasted the launch with a starlet- and influencer-studded dinner last tonight. The Drop 001 collection is also being offered to other retailers for August deliveries, concurrent with resort.

“It’s more than just a denim relaunch. Alaina has created covetable pieces that fill a wardrobe — graphic T-shirts, sweats, jackets to pair back to the coveted denim update. It’s how that girl is dressing in 2018, street meets glam,” Walker said.

Etue said that the idea is “to do regular seasons and fill in with drops and collaborations. Once you start seeing how girls like Gigi Hadid style it, I think it’ll really take off.”

The M.O. was to make Frankie B both girly and sexy but also boyish and futuristic at the same time. That said, forthcoming collections will include modern takes on Frankie B’s original lace-up front and flare styles. While the plan is to keep the brand Made in L.A., Etue said the goal is to also make it more affordable to the masses long-term, much the same way the original did.