"Freckleface Strawberry: Best Friends Forever" is the third book in the children's series. 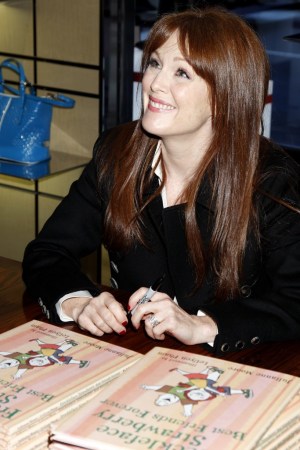 “It’s the third in the series,” Moore explained, adjusting her bangs, which were new. “The hair? The hair I love. But the book, I won’t tell you what happens. You’re going to have to read it and find out. Let’s just say that there’s a rather big breakup and then…you’ll have to read it and see! Though you’re not exactly my demographic.”

This story first appeared in the December 8, 2011 issue of WWD. Subscribe Today.

Moore’s own children are “relatively freckly,” she explained. “They’re not red-red like me. One’s strawberry blonde and one’s auburn. They’re fans of the books.”

Moore was wearing a Dr. Martens-esque pair of lace-up black leather Tod’s boots with her Derek Lam shirtdress and leather jacket, a more tough look than one expects from a children’s author. “I know, they’re badass,” Moore laughed.

Lauren Santo Domingo got a copy of the book signed by Moore for her “little one, Nicolas!” who was feeling under the weather. Also at the fete were Adelina Wong Ettelson, Celerie Kemble and Derek Lam.