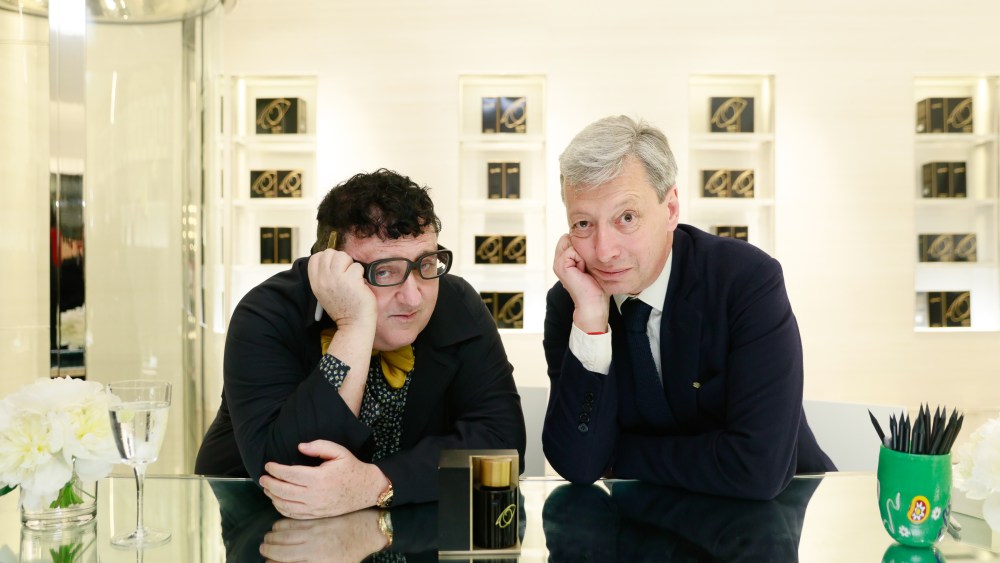 “We had a blind date and it started like that,” said Frédéric Malle on his fragrance collaboration with Alber Elbaz. “It just felt very natural and nine months later we had a baby!”

The perfume publisher and former Lanvin designer, Elbaz, came together Thursday night at the Barneys New York’s Madison Avenue location to highlight the launch of their fragrance collaboration, called  Superstitious. The event brought together the likes of Glenda Bailey, Simon Doonan and Amanda Ross, among others.

“The fragrance is something that Frédéric worked on for a very long time,” Elbaz said. “My side was to come together, create a story with Frédéric and find a name. We just put all of this friendship and great moments together.”

To promote the fragrance, which is available exclusively at Barneys New York in the U.S., the pair signed boxes of the fragrance for clients, who also got the chance to take pictures with the perfumer and designer. Copies of Malle’s book, “Frédéric Malle: On Perfume Making,” were also available for purchase.

“It’s a beautiful fragrance and a really nice collaboration between two amazingly talented artists and designers,” said Daniella Vitale, chief executive officer of Barneys New York. “Both of them started with Barneys, which is an amazing story in itself. They both come from two completely different worlds and it’s nice they were able to collaborate on something unique to both of them.”

With French perfumer Dominique Ropion, Malle worked to create a fragrance that is meant to capture the scent of a dress. Classic and mysterious like Elbaz’s designs, the fragrance is made with notes of Turkish rose, Egyptian jasmine, peach, sandalwood and patchouli. It currently retails for $370 at Barneys New York and Frédéric Malle’s freestanding stores and web site.

“We did it with passion and love,” Elbaz said. “When people ask me what the ingredients are, I say love and friendship.”