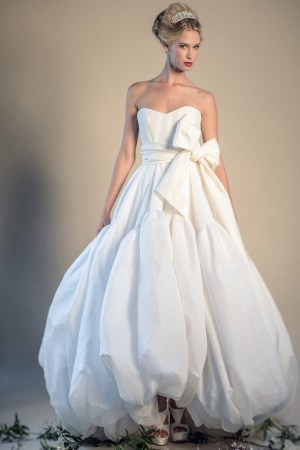 HAPPY BRIDES: Seeking to expand her 20-year-old business, French luxury bridal designer Célestina Agostino has turned to crowdfunding to raise capital. Agostino aims to be the first household name for French bridal gown designers. “There are no French designers who are known internationally in the world of wedding gowns,” said Agostino. “I would like Célestina Agostino to be equally as recognized as Vera Wang, because of my own style, of course.”

The company has turned to crowdfunding in part because of the difficulty of obtaining funding from French banks, the designer said. Agostino, who has made more than 6,000 bridal gowns, is counting on the support of her customers.

“I’m the person who tends to each client 100 percent. At other boutiques, it’s not like that. At Célestina Agostino, we’re like a family,” she said.

Didier Bodart, the company’s chief executive officer, said customer loyalty was key. “We felt these brides would be very interested in the company’s future,” he explained.

Célestina Agostino gowns are available in 22 points of sale in eight countries, with a starting price of 5,000 euros, or $5,425. According to Bodart, the company will use funds to expand the number of distribution stores across the United States, Japan and Europe.

Agostino is dreaming big: Her goal is to open a showroom in New York. “Right next to Vera Wang,” she said.