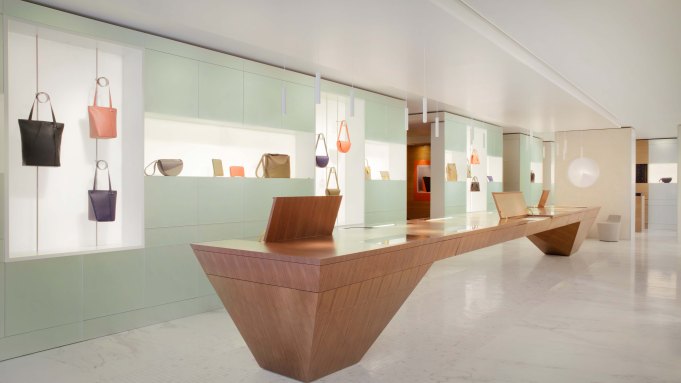 TURNING THE PAGE: French leather goods brand Camille Fournet is opening a new chapter in its history with a revamped brand identity, a duo of ambassadors and a renovated Parisian flagship to be unveiled on Oct 19.

Founded in 1945 by the French leather craftsman of the same name, the company first focused on custom straps in leather and exotic skins for luxury watches, before extending to own-brand small leather goods after its purchase in 1994 by Françoise and Jean-Luc Déchery. The brand purchased historic glovemakers Lavabre Cadet in 2014. Its goods, still manufactured in the northwestern French region of Picardy, are sold through its network of stores in New York, Beijing and other international destinations as well as its online store.

To strengthen the identity of its collections, the brand has chosen industrial designer Claire Aubadie-Ladrix, a 2015 graduate of the Les Ateliers-Paris Design Institute — France’s only industrial design school — as its artistic director, in charge of overseeing the development and extension of its lines, in particular bags such as the “32.04,” an all-leather half-moon design that does not contain any metallic parts.

Among the first changes are a new graphic identity, featuring a slimline capitalized logo designed by Agence Simone in collaboration with the brand’s design studio, and a revamp of its Paris flagship.

The Paris store, home to the brand since 2014, has been redesigned by French architect Boris Cindric and brand image director Françoise Déchery. Located at 5 Rue Cambon, the 2,150-square-foot space will feature clean contemporary lines and a large rugged oak table in the center of the store, fitting in with Aubadie-Ladrix’s focus on “exchanges and meetings” moving forward.

To further embody the brand and help bolster its presence through an ongoing series of collaborations, Aubadie-Ladrix tapped calligrapher Nicolas Ouchenir and actress-turned-filmmaker Carmen Chaplin as a duo that embodies “the convergence point [between brand, craftspeople and ambassadors], through artistic practice that are expressed through physical actions,” the artistic director said. “[Ouchenir] represents the hand, the act of drawing while [Chaplin] comes from image, and is the eye.”

The first collaboration, brokered by the calligrapher, is a revamp of the menus of fashion-favorite eatery La Belle Époque, now dressed in a leather livery featuring geometric cutouts inspired by the restaurant’s Art Nouveau decor, to “put craft back in the hands of people. Today, crafts are no less in danger of being lost, but it is still necessary for the wider public to feel that craftsmanship is a notion that is fluid, simple and easy to appropriate into their lives. The idea of this ‘blank page’ was to show that everyone is involved in this new chapter,” Ouchenir said.

It is a vision shared by Chaplin, for whom “leather goods and film have a lot in common: so many hands are involved in the creation.” The filmmaker’s contribution is slated as part of the brand’s official relaunch events in early November.