Do-gooders came out to the Matthew Williamson store in the Meatpacking District Wednesday for some guilt-free shopping. 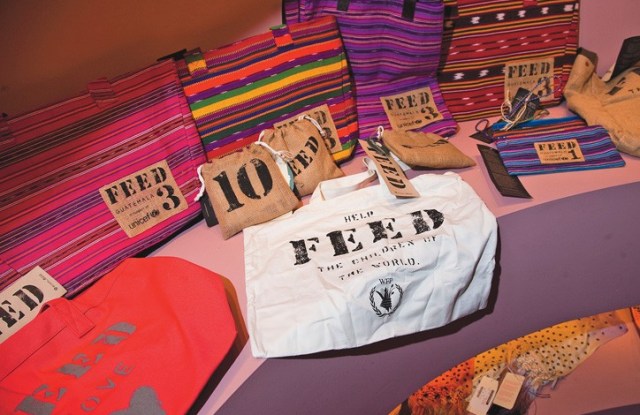 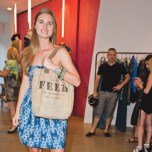 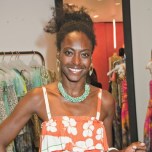 FRIENDSHIP BRACELETS: Do-gooders came out to the Matthew Williamson store in the Meatpacking District Wednesday for some guilt-free shopping. Co-sponsored by Feed and Same Sky, the event benefited each brand’s socially geared cause. Juggling what she described as “summer craziness,” Lauren Bush, who co-founded Feed Projects, an organization that fights global hunger through the sale of its bags and other accessories, posed for photos with Same Sky founder Francine LeFrak before dashing out to a prior engagement.

“Francine’s been a long-term friend. Our organizations are founded around the same principles,” said Bush, who donned a Cynthia Rowley strapless print dress. “Cynthia has also been a good friend and big supporter.”

Buzzing about the spacious, colorful store, guests tried on Same Sky’s vibrant, handmade glass-beaded bracelets and necklaces, which are made by Rwandan women, many of whom contracted HIV during the genocide there in the early Nineties.

“We believe in a hand up, not a hand out,” said Same Sky’s LeFrak, explaining the organization directly works with the artisans to maintain a “sustainable income.”

“When she saw the jewelry, it gave her goose bumps,” LeFrak said, turning to Consolee Nishimwe, a Rwandan genocide survivor, who now lives in New York. “It’s the greatest thing when you can empower a woman.”

COCO EVERLASTING: Karl Lagerfeld is known for being able to churn out impressive illustrations on a whim, and now one of the designer’s original sketches is to be immortalized as a commemorative plaque honoring Gabrielle Chanel. The plaque will hang outside the Chanel boutique on Avenue Lucien Barrière in the French resort town of Deauville, with its inauguration scheduled for today.

EBAY, CFDA FIGHT COUNTERFEITS WITH STYLE: Fashion-minded techies and business-minded designers came together Monday night to fete eBay’s collaboration with the Council of Fashion Designers of America to fight the proliferation of counterfeit goods.

Held at the Beach, the Dream Downtown’s New York rooftop poolside oasis, the CFDA and the online marketplace showed off a collection of 50 newly created canvas bags, sporting the saying “You Can’t Fake Fashion.”

Retailing for $150, the proceeds will benefit the CFDA Foundation, according to its executive director Steven Kolb, who mingled poolside with friends.

Sipping peach sangria and cool lemon-flavored drinks infused with vodka and sprigs of rosemary, designers including Jason Wu, Rebecca Minkoff, Elie Tahari and Monica Botkier marveled at their colleagues’ creations, which were on display behind Plexiglas cases.

For those still hoping to get their hands on a canvas tote, buyers can still snap up the uncustomized version of the bag for $35.

SHOP-TIL-YOU-DROP: Milan’s third edition of Fashion’s Night Out on Sept. 8 will involve about 600 stores, 50 more than last year, and will be extended to the Corso Vercelli, Via Belfiore and Corso Genova neighborhoods.

Starting this year, Rome also embraced the FNO formula and is gearing up to host the event on Sept. 15, said Vogue Italia editor Franca Sozzani during a press conference. “Our aim is to develop a new model because we don’t want to repeat what we have already done in Milan,” said Sozzani.

In Milan, the streets will be animated by live music performances by different artists, including the Under Thirteen Orchestra, featuring a group of 90 kids, and British jazz singer Sarah Jane Morris.

To increase the event’s success, Sozzani stressed the importance of designer presence in the stores, which would be joined by Naomi Campbell.

Among other initiatives is “Watch & Clik,” a photographic exhibition organized by Vogue Gioiello in collaboration with Assorologi to promote the work of 100 up-and-coming photographers, who were asked to interpret time.

“Milan is already the city of fashion and design so our aim is to make it also the city of photography,” said Sozzani. Revenues from this project are destined to the recovery of an old typical farmhouse in Milan.

HONK IF YOU LIKE SHOPPING: Carmageddon is coming, and even the most laid-back of Angelenos are panicked. The impending doom sent into motion by the closure of a heavily-trafficked 10-mile stretch of the 405 Freeway, Los Angeles’ main north-south artery ferrying drivers from the city’s West Side to the San Fernando Valley, could be very real. Mayor Antonio Villaraigosa, who anticipates the weekend will be “an absolute nightmare,” has advised Los Angeles residents to stay out of their cars and in their homes. “If you think the traffic is bad now, wait until this weekend,” he said during the “On Air with Ryan Seacrest” radio show earlier this week.

The bunker mentality might be good for e-commerce businesses, but it is definitely the opposite for brick-and-mortar retailers that require people to at least leave their houses to spend. Those retailers are doing their best to persuade people to do just that. Gap’s incentive is 40 percent off of select styles at L.A. stores. Shopping center owner Westfield is providing free valet parking at Westfield Fashion Square in Sherman Oaks, Calif., doling out savings booklets at Westfield Culver City with special offers from the shopping center’s stores and giving away gift cards worth up to $500 at Westfield Century City. Macerich-owned Santa Monica Place is encouraging inhabitants of Santa Monica to patronize local stores for the weekend. “People still need to eat and shop,” said Adrienne De Vore, Santa Monica Place’s senior marketing manager.

People also still need to work at stores, which traffic snares could make difficult. In order to ensure shops are staffed properly, De Vore said retailers at Santa Monica Place are trying to maximize the number of employees from the surrounding neighborhood and instructing those that live further away to supply themselves an hour leeway for their drives both to and from the shopping center. A Gap spokeswoman said, “Those employees who normally have to commute via the 405 to get to work are being given the opportunity to work at a Gap closer to their house.”

FORD FANCIES LONDON: For the first time, Tom Ford has an official slot on the London Fashion Week calendar. According to a provisional schedule issued by the British Fashion Council, Ford will show his women’s collection at 6:00 p.m. on Sunday, Sept. 18. The small showroom presentation will be by invitation only. Over the past few seasons, Ford has shown his men’s and women’s collections during a series of appointments with press from monthly titles, rather than staging one presentation. London Fashion Week runs from Friday, Sept. 16 through Wednesday, Sept. 21.

NYCKED FEET: Lorenzo Martone and Jules Kim have designed the first shoes for their Nycked swimwear line. Collaborating with Vans, the duo created limited edition gladiator sandals in black leather and gold leather, as well as a sneaker style. The footwear will be donned by models at the Nycked swim show at the W South Beach in Miami on Saturday, which is slated to feature a show from two Cirque de Soleil performers. Martone and Kim will then sell 100 pairs of the shoes on the Nycked Facebook page.

PRATT’S NEW CHAIR: Jennifer Minniti will join Pratt Institute’s Fashion Design department Aug. 1 as chair. She will relocate to the East coast from California College of the Arts’ fashion department, where she has served as an associate chair and associate dean at CCA and has taught for the past 14 years. At Pratt, Minniti will replace Rosie Depasquale who exited two years ago. Rebeccah Pailes-Friedman, who teaches in the department, has been serving as the acting chair.