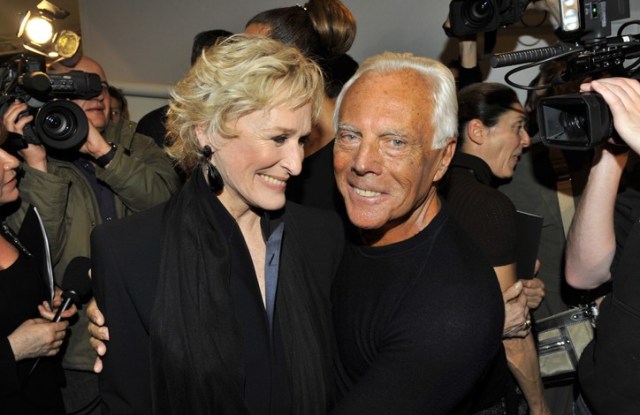 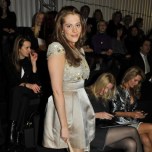 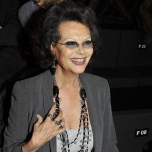 CLOSE CALL: After a hectic schedule for her high-powered role as a litigator in the TV show “Damages,” Glenn Close kicked back at the Giorgio Armani Privé couture show Monday, where guests included Prince Albert of Monaco’s girlfriend, the swimmer Charlene Wittstock and actress Claudia Cardinale.

“I feel like I’ve just been let out of school,” Close said. “I’m ready to party.” Wearing the same black and white Armani outfit as when “101 Dalmatians” premiered in 1996, Close said she’s been going back to her closet and having items retouched by the label. Top model Eugenia Silva said she’s just joined a cast of models, including Irina Lazareanu and Karen Elson, in a Michael Thompson shoot for Tiffany’s next campaign. “I loved doing it. Tiffany’s is so New York,” Silva said, adding she next hopes to start an acting career.

This story first appeared in the January 27, 2009 issue of WWD. Subscribe Today.

British actress Kirsten Lea, meanwhile, said she’s relishing being showered with fashion freebies thanks to her upcoming role in the romantic comedy “Fashionistas,’ directed by Donald Petrie of “How To Lose a Guy in 10 Days” fame.

“It’s ‘The Devil Wears Prada’ meets ‘The Secret of My Success,’” said Lea, adding the movie, due to start shooting in New York this spring, has caught the attention of labels like Jimmy Choo for product placement opportunities.

Lea is in Paris for fittings at Armani and Dior for the BAFTA awards while she hopes “The Soloist,” her Hollywood debut, starring Robert Downey Jr. and Jamie Foxx, will be an Oscar contender next year.

UNITED FRONT: The controversy surrounding Michelle Obama’s decision not to wear any clothing by an African-American designer during last week’s inaugural festivities continued to swirl Monday, after such media personalities as CNN’s Wolf Blitzer and Matt Drudge picked up the story.

B. Michael said the statement made on behalf of the Black Artists Association (and first published in WWD Jan. 22) does not represent his point of view. “I understand their sensitivity and respect their right to express it,” he said. “I personally believe it is an unfair expectation to place on the First Lady. Fashion is subjective and a matter of personal choice.

“As a designer of color, I would encourage the fashion industry, editors and media to lead the way and be more inclusive. True change in America is going to be a collective effort,” he said. “As an American designer, I am excited that Mrs. Obama, in her role as the First Lady, will heighten the awareness of American style, which resonates into business and jobs in the fashion industry. I applaud Mrs. Obama for her style and her choices. Most of all for wearing what really matters: dignity and grace.”

BAA’s co-founder Amnau Eele, a former runway model, said she was not speaking on behalf of individual designers, but merely wanted to broach the subject. She has faced death threats as a result. Eele is organizing a forum that will be held next month in New York. While the First Lady’s inaugural wardrobe will be the springboard for the discussion, the aim is to encourage young African-American designers and students to remain stalwart in their careers.

She said, “B. Michael has a right to issue a statement. It doesn’t change the fact that he’s an excellent designer and he deserves to be considered to dress the First Lady, whether he stands with BAA or not. We don’t represent designers, we represent painters. We spoke up for black designers because we felt it was the right thing to do.”