Cameron Diaz led a power pack of blonde supporters at the show. 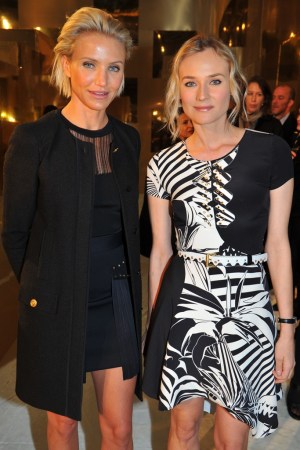 PLATINUM POWER: A gaggle of glamorous blondes congratulated Donatella Versace backstage after her Atelier Versace presentation, which kicked off Paris Couture Week on Monday. Cameron Diaz, Diane Kruger, Abbie Cornish and Ludivine Sagnier crowded around the diminutive designer. “You know I’m a sucker for anything glittery,” Diaz told her with a grin. The actress has been getting physical for her two next releases, learning a ballroom dancing routine for “What to Expect When You’re Expecting,” and mastering the basics of steer roping for “Gambit,” written by Joel and Ethan Coen. “This is why I love my job so much, because I get to learn all these different things,” she said.

Cornish said she was not sure whether she would attend the Oscars this year, but she was impressed by Versace’s red-carpet offerings. “These dresses are incredible,” she murmured, eyeing the towering models backstage.

Kruger is getting ready to shoot in “The Host,” director Andrew Niccol’s adaptation of the best-selling novel by “Twilight” author Stephenie Meyer. “I play The Seeker. It’s a love triangle, of course, but it’s about aliens coming into human bodies and taking over,” she explained. “Earth has been occupied by all these aliens, and The Seeker is trying to find the last humans.”

French actor Hugo Becker, who plays Louis Grimaldi on “Gossip Girl,” hinted his character may yet have some mileage in him. “I’m not totally allowed to say anything about this. I will tell you that I finished shooting last December, but I’m not saying I finished shooting everything,” he teased.