Kate Hudson and Goldie Hawn lit up the front row at the haute couture show in Paris.

By Joelle Diderich and Paulina Szmydke on January 25, 2015
View Slideshow 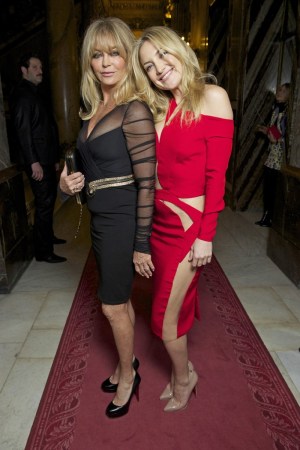 PARIS WHEN IT SIZZLES: She stunned in Versace at the Golden Globes. Donatella Versace gave Kate Hudson another opportunity to show off her bodacious bod, kitting her out in a red dress with risqué sheer panels at the Atelier Versace haute couture show in Paris on Sunday night.

But the “Bride Wars” stars revealed she would not be hitting the red carpet at the Academy Awards. “I’m not going to do the Oscars this year, I’m going to be working,” she told WWD.

Hudson said she would start shooting in April on Lee Daniels’ Richard Pryor biopic, in which she will reportedly play the late comedian’s wife. The actress, who recently announced her split from Muse singer Matt Bellamy, was enjoying a girlie weekend with her mother Goldie Hawn, who accompanied her to the show.

She confessed it had been a while since they took time off together. “I mean, I don’t even remember to be honest,” she said.

At the after-party at nearby nightclub L’Arc, Michelle Rodriguez took over the DJ booth, while Eva Herzigova rubbed shoulders with Riccardo Tisci in the VIP lounge.

“My life now is all about the foundation,” said Hawn, who just completed her third book on happiness in addition to running her charity, which helps children deal with stress and learn better.

The “Private Benjamin” star is slated to give a speech at the University of Edinburgh on March 6. Could she offer a piece of advice on how to be happy? “I tell you one thing: Live and be inside of the moment right now,” she said with a smile.

Shortly afterwards, Ellie Goulding took to the club’s intimate stage. “How incredible was the show? I’m still overwhelmed by it,” she gushed before crooning her hit song “Burn.”