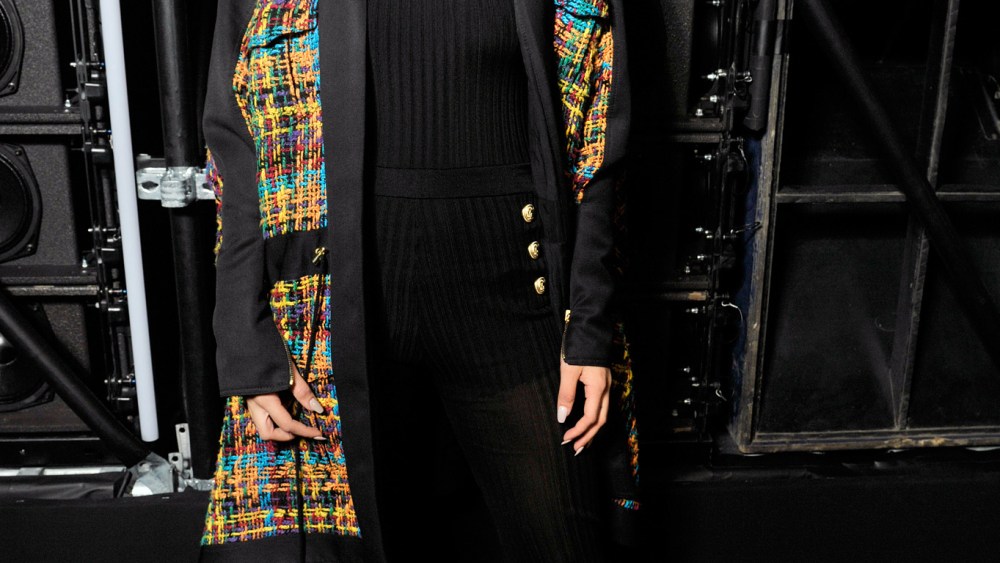 Balmain is getting much closer to Hollywood: The French house has signed a lease for a 2,700-square-foot boutique on Melrose Place. It is slated to open mid-year.

Diemoz had cited ambitions to grow the U.S. market to about a quarter of its revenues.

Also at the show was Valentino ceo Stefano Sassi, who sits on the board of Balmain, but has no official title at the house. Qatar-based Mayhoola for Investments owns Valentino, Balmain and Pal Zileri.

“Valentino is the senior company of Mayhoola and we try to support it,” he said of Balmain, whose accessories push debuted on its fall runway in Paris on Saturday.

Sofia Richie sat front row in a Technicolor tweed coat from the house. The social media influencer and daughter of pop singer Lionel Richie said she wasn’t sure what to expect from the new accessories line. “This is like a big surprise for me — I’m excited to see what comes out.”

Richie said she had recently collaborated with her friend Vas J. Tings on a cover for his new fashion magazine Tings London.

New Zealand-born rugbyman Dan Carter, who is now in his second season playing for Racing 92 in Paris, came to the show during an off-weekend between matches. “Coming from New Zealand, I have to say this is quite a few steps up,” the athlete said about the Paris Fashion Week scene.

Carter has modeled for Jockey and is sponsored by Adidas, but more recently garnered attention for his outrageous mustache on a vintage-themed billboard for Racing 92 that was plastered throughout the Paris metro system last fall.

“I got sent so many pictures, and got mocked by plenty of my teammates,” said Carter — who added that the mustache was a fake. “I tried to grow a real one in November, but my mustache growing capabilities are hopeless.”