Front Row at Band of Outsiders

Kanye West and Kirsten Dunst were both seen at Band of Outsiders. 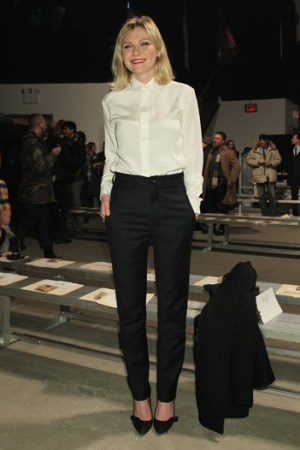 BANDED TOGETHER: Kanye West and Kirsten Dunst were like night and day after Band of Outsiders. Approached with a few friendly questions, West said, “I don’t do press.” Apparently even his Valentine’s Day plans were off limits. “You’ve got to respect the person. Do you know what I’m saying?” West said. Ditto for photo requests — “Now I’m getting perturbed,” he said.

But Dunst had nothing but love for Lars von Trier whom she just shot The Melancholst with. “He was one of the most sensitive directors I have worked with,” she said. Considering another stormy piece, “On the Road,” was her other recent project, it’s easy to see why Dunst said, “Now I want to do a fun light comedy.”

Her pal Scott Sternberg featured her in his latest campaign and spotlighted “The Virgin Suicides” on his women’s storyboard this season but the actress takes no credit. “When you have friends who are creative, you inspire each other,” Dunst said.