Selena Banks, Alexandra Richards, Bailee Madison and Petra Nemcova were among the front row guests at the show. 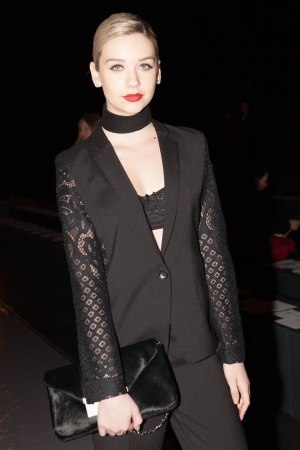 BCBG’S FRONT ROW: Selita Ebanks, Abbie Cornish, Debby Ryan, Annet Mahendru, Bailee Madison and Petra Nemcova were among the front row guests at BCBG Thursday morning. “It’s my first fashion show ever,” said Mahendru, who said she’s been busy with “The X-Files,” which is airing now, and has some things she’s working on but can’t talk about them yet.

Louise Camuto, chief creative officer of Camuto Group, was also in the audience. Camuto makes BCBG’s footwear. Camuto said she was pleased with her company’s Super Bowl commercial that aired Sunday night and said her late husband Vince always wanted to air a spot during the Super Bowl. The ad was put together quickly, she said, adding they didn’t have time to be choosy about the dog featured. But it turned out they cast a Boxer, which was her husband’s favorite dog.