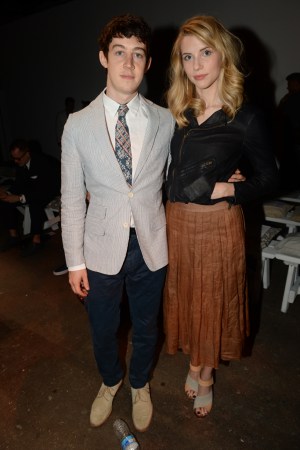 Sincerely Jules and Bandier Team on First Collection for Amazon

The young actor Alex Sharp has won a string of accolades, including a Tony Award, for his performance as a teenager with Asperger’s Syndrome in the acclaimed play “The Curious Incident of the Dog in the Night-Time,” now on Broadway.

Once a week, he gets a day off.

“Years ago when they did the play in London, they established that one person can’t play the role because it’s too strenuous,” he said.

On Wednesday, he chose to spend part of his free day somewhere far, far away from the stage: a fashion show. He was at ArtBeam in Chelsea to see Billy Reid’s spring collection, sitting front-row with Colton Haynes, another fashion week newbie, and Karen Elson.

Though the Southern designer has dressed the English actor for the Costume Institute gala and the Tony Awards, and even threw a party in his honor before the event, Sharp was experiencing a first.

“I’ve never been to a fashion show,” he said.

And this would be it for now, at least for this New York Fashion Week: Men’s. He was reporting back to duty on Thursday. It turns out some things have changed since his Tony win.

“There are a lot more people at the stage door waiting for signatures,” he said. “And I’m a  little bit more popular on Facebook.”