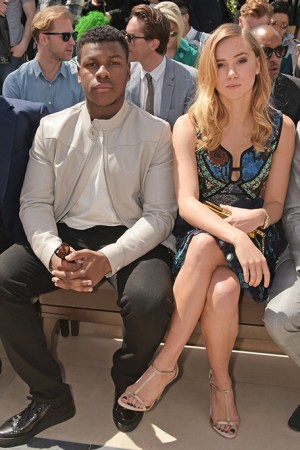 GARDEN PARTY: While the Burberry Prorsum men’s show was under way, staffers were busy setting up for a post-show picnic, complete with large black and white animal-print blankets, and glasses of Pimms from Thomas — the café that’s just opened at the brand’s Regent Street store.

David Rhodes, who performed a moving rendition of classic Eighties song “Vienna” for the show, plus two of his own songs backed by a 27-piece orchestra, was having a glass of Champagne in the sunshine. “This was unbelievably different to my usual style of gigs. It’s such a huge-scale thing,” he said. “For a normal gig, you sort of just rock up and do your songs, but for things like this you have a responsibility to put in something different, something special. I had to almost relearn the songs once we had changed all the arrangements.”

Rhodes’ album “Wishes” is due out in September but in the meantime he is on tour and then doing the U.K. festival circuit. “I’m going to Scandinavia for a week – Oslo and Stockholm – then I’m going to Switzerland and then there’s a few festivals in Holland, and then its Festival Season here,” he said. “I have a love-hate relationship with Glastonbury because the weather can make it horrible, but I love Wilderness – it’s probably my favorite festival.”

Tinie Tempah had his summer plans mapped out too. “I am going to be in Ibiza every Tuesday over the summer, hosting pool parties at the Hard Rock Hotel from about 12 p.m. till about 7 in the evening,” he said. “I don’t know how I am going to do it, I’ve started to go to the gym so I look ok without a T-shirt, I’m going to try and stay fit, I’m going to drink a lot of water. It’s going to be mental but we’re up for it – young and fit!”