Rachel Bilson and Kate Bosworth were all smiles at Burberry. 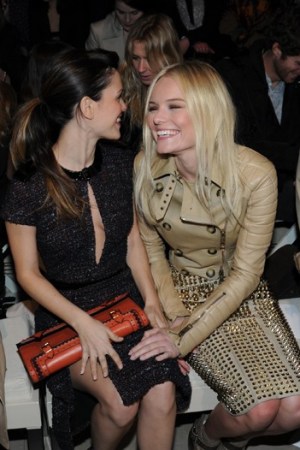 “Everybody is asking me if it hurts to sit down with the studs, but it doesn’t at all, it’s just very heavy,” Kate Bosworth said, referring to her Burberry pencil skirt pavéd with spikes and studs. Bosworth, part of a front-row lineup that included Rachel Bilson, Alexa Chung, Poppy Delevigne and Stella Tennant, said she’s been busy producing “Lost Girls and Love Hotels,” based on the novel by Catherine Hanrahan.

Douglas Booth confirmed that he’s been renewed as the face of the Burberry Sport fragrance campaign. He also recently finished filming “LOL” with Demi Moore and Miley Cyrus. “It’s a coming-of-age film about teenagers and their relationships with their parents,” he explained.

Chloe Green, the daughter of Topshop tycoon Sir Philip Green, divulged that she’s working on her own women’s wear collection which she’s hoping to launch in November. “I haven’t named it yet. Hmmm. Maybe I should call it Project One?” The Kills’ Alison Mosshart, meanwhile, was not at any loss for names. “I just finished working on my new record at 5 this morning so I’ve been sleeping most of the day,” she said. “It comes out April 4, and it’s called ‘Blood Pressures.’ I should really be celebrating tonight — if I’m up to it!”