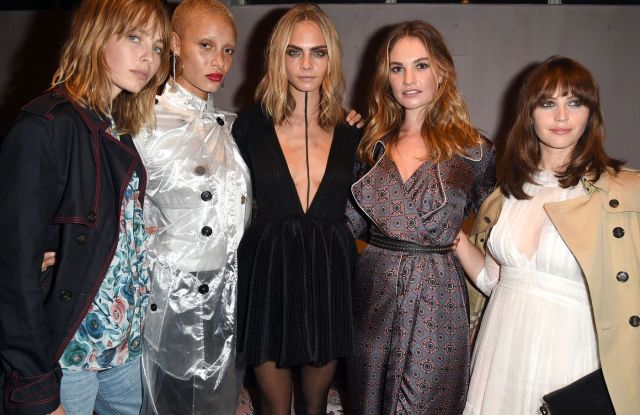 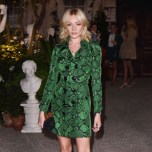 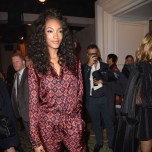 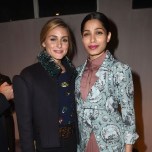 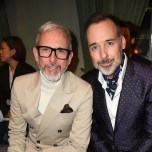 PERIOD DRAMA: Thank goodness for a little light relief at the end of a long day of shows. As the house lights went down before the Burberry show, and the photographers’ pit was plunged into blackness, an owl’s hoot could be heard from the direction of the pit. It was followed by a forlorn meow, then a cricket’s chirrup, and what was actually a pretty convincing dove’s coo. Then silence.

Then a voice, Italian-accented, piped up: “I like the ‘Exit’ signs; they make a very nice green light.” Bring on the LOLz.

After that it was all drama. All rich brocades, lace, paisley dressing gowns, frogging on coats, lots of passmenterie, devoré, inspired by Virginia Woolf’s “Orlando” (a copy of which was on every seat), all set to an epic live performance by a 21-piece orchestra, pianist Rosey Chan and vocalists, performing “Reliquary,” a score written exclusively for the show by British composer Ilan Eshkeri.

Familiar with drama was actress Lily James, the new face of the My Burberry fragrance, who starred in “Downton Abbey” and this year’s “War and Peace” television series. Next up for her, yet another period drama.

“I will start filming ‘The Darkest Hour’ in a couple of weeks. It’s about Winston Churchill, who is played by Gary Oldman, and those early moments in the war,” she said. “I’ve just seen the first images of him dressed up as Churchill and it’s mind-blowing.

“My character was Churchill’s secretary and typist during the time that he wrote all his big speeches,” she explained. “And so she was right there with him on the front line and they developed this quite special bond, really, and it’s a really lovely part.”

The show was held at Makers House, a new venue for the brand, which has held its shows in Kensington Gardens for several years. The disused space was formerly occupied by Foyles bookshop and was designed to look like a grand English home, complete with a sculpture garden inspired by the interior and garden designs of Nancy Lancaster, heavy velvet curtains, a plush carpeted runway and toile de Jouy seats.

Finding his seat upstairs was “X-Men: Apocalypse” star Nicholas Hoult, who was patiently waiting alone, completely ignored, while celebrity photographers snapped Sofia Boutella. “Maybe they think I’m her security guard or bag handler,” he said. He was soon to be heading back to Los Angeles, but he always comes back to London, where the first thing he does is make a sandwich: “cheese and pickle on this bread.”

The rest of the VIP front row was a lineup of some of Britain’s best young actors, including Frieda Pinto, Felicity Jones, Jenna Coleman and Clara Paget. They were joined by the brand’s usual coterie of models including Cara Delevingne, Jourdan Dunn, Alexa Chung, Poppy Delevingne and Edie Campbell, as well as Mario Testino, and directors Steve McQueen and Tom Harper.

Handcrafted Burberry statues lined the entrance, leading to a space that will transform into an exhibition that’s open to the public from Sept. 21 to 27, a product of a collaboration between the brand and The New Craftsman concept shop in Mayfair. It will showcase original works by the makers, who will use the space to experiment and create, based on the collection.

Several of the artists were present at the show, demonstrating their skills, including sand caster Grant McCaig, and passmenterie experts Aimee Betts and Jessica Light, with Rosalind Wyatt among the most popular with her calligraphy, which she was doing for guests and the pre-show cocktail reception.