At the Chanel show, Keira Knightley and Lily Allen ogled the stunning black and white graveled courtyard set that evoked the gardens of Versailles. 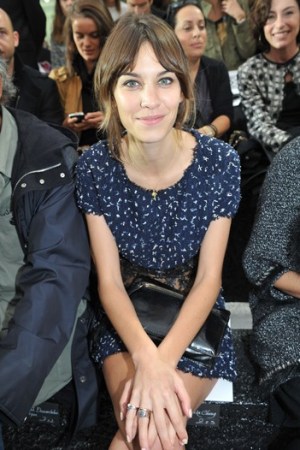 GARDEN PARTY: At the Chanel show at the Grand Palais, Keira Knightley and Lily Allen ogled the stunning black and white graveled courtyard set that evoked the gardens of Versailles. “Every time I come here, it’s like going to the ballet,” cooed Lily Allen. Eyeing the orchestra, the singer, who is expecting a baby, recalled her live performance at the Chanel show last fall. “It was an amazing moment, but I wouldn’t feel quite up to it now,” she laughed.

Vanessa Paradis said next month will see the release of a CD and DVD of her acoustic performance at the Royal Opera in Versailles last summer. In the meantime, she is in Paris shooting “Café de Flore,” in which she plays a single mother who shares a special relationship with a seven-year-old – a role she feels particular empathy for. “It’s a tough life,” Paradis, who has two children with Johnny Depp, said of single-parent families.

Anna Mouglalis said she was turning the tables on her partner, actor and director Samuel Benchetrit. Having just starred in his upcoming movie, “Chez Gino,” she has cast him as the male lead in her first feature film, due to shoot next year. “It’s an initiation to love,” she said. Clémence Poésy has a busy slate: In addition to the Harry Potter movies, she plays the title character in “Lullaby for Pi” and has a small part in Danny Boyle’s “127 Hours.” She also plays Joan of Arc in “Jeanne Captive,” currently shooting outside of Paris. “It’s a little scary,” she admitted. Claudia Schiffer hinted that she has a series of clothing-related ventures, likely to see the light in 2012. “Baby steps,” she quipped. So does she ever miss the catwalk? “No, it’s quite the opposite. It’s more like, thank God I don’t have to do that again!” she laughed.