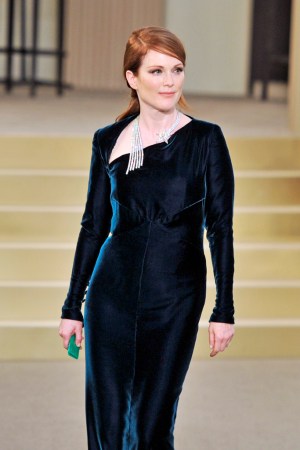 “Of course, none of us knew how to gamble, so we all had to be trained,” Julianne Moore confessed after the Chanel couture show, where front-row celebrities were the centerpiece of the casino set, seated at blackjack and roulette tables, dripping in high jewelry.

“We had roulette classes. I won yesterday and lost today,” added Kristen Stewart, who carried a cigarette case and cigarette holder — both items paved in diamonds.

Stewart, who embraced her “Still Alice” co-star Moore, said she is set to start filming another Olivier Assayas film in November in Paris.

“I play a girl who’s a personal shopper and has identity issues. She’s drawn into it, but is very conflicted about it. It’s also a ghost story, so it’s all very trippy,” she related.

Stewart recently wrapped Ang Lee’s “Billy Lynn’s Long Halftime Walk,” an Iraq war drama filmed at an exceptionally high-film rate, and in 3-D, calling the technology “absolutely ground-breaking” and requiring minimal takes. “We were all a bunch of guinea pigs,” she smiled.

Moore, poured into a dark green velvet column, said she would return to New York and go right into intense makeup and hair tests for her next movie, “Can You Ever Forgive Me?” She is to portray the central character, the late writer and literary forger Lee Israel.

“Google her. Let’s put it that way,” she said when she saw a reporter’s puzzled expression. “I won’t be able to resemble her completely.”

Vanessa Paradis said she’s no gambler, but enjoys the social scene around the betting tables. “Everybody gets dressed up: Casinos take you back in time,” she said.

Korean pop star G-Dragon was easy to spot amidst the black-tie crowd with his flaming orange hair. He is to resume his world tour, which is to cover large swaths of China, the U.S., Canada and Mexico. While in Paris, he checked out the amusement park installed in the Tuileries and tried a big slide. “I actually hurt myself on it,” he demurred.

Lily Collins played blackjack during the show. “It gets a little bit addictive after a while,” she confided.

Karl Lagerfeld designed her fit-and-flare dress, which she said echoes the costumes for her next role in an untitled Warren Beatty film set in Fifties Hollywood.

“I feel very appropriately dressed,” she said. “It’s all very, very true to the period.”

Actress Jemima Kirke said she would return to the U.S. to resume filming “Girls,” meaning she would have to return her diamond headband and brooch.
She noted the latter, while smaller, is more expensive, and was relocated from her neckline to her waistband by Lagerfeld himself.