By Miles Socha and Joelle Diderich on October 6, 2015
View Slideshow 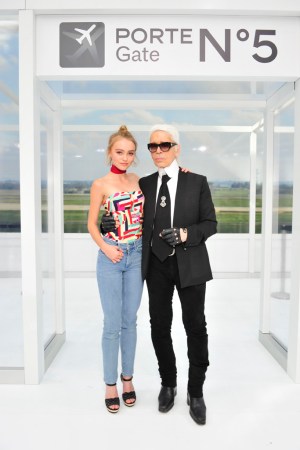 READY FOR TAKEOFF: “This is the nicest airport I’ve ever been to,” Lewis Hamilton said as he took in the set for the Chanel show on Tuesday, a giant Terminal 2 C complete with check-in counters and a vast readerboard.

After the show, he was to board a plane for Moscow for a Hugo Boss event, and then head to Sochi for the Russian Grand Prix this weekend.

Vanessa Paradis said she’s not such a fan of airports, “but they’re like my second home. I pass the time by listening to music. Or I read. Or I arrive last-minute.”

It seems that being a Chanel ambassador runs in the family. Paradis arrived with her daughter Lily-Rose Depp, who is the face of Chanel’s eyewear ads. The rising actress is in Paris shooting “Planetarium,” a 1930s-set drama in which she stars opposite Natalie Portman.

“I don’t want to give away the plot, but it’s a super beautiful and super interesting film. I love period movies, so the costumes are fantastic,” Depp said.

The 16-year-old relished the opportunity to sit in the audience after playing a starring role in Chanel’s couture show in July. “This set is amazing, obviously, but on top of that, I have loads of friends walking in the show,” she remarked.

Cara Delevingne was not among the models this season, but still managed to be part of the catwalk action. Arriving straight from the airport after flying in from Rio de Janeiro, she and her girlfriend Annie Clark, aka St. Vincent, sat with Karl Lagerfeld’s seven-year-old godson Hudson Kroenig in the middle of the runway.

Wearing a bright blue hooded jacket, Delevingne leapt up to take a final bow with Lagerfeld and Kroenig, whose father Brad modeled in the show.

Kaya Scodelario, meanwhile, was cuddling up to fiancé Benjamin Walker in the front row. Fresh off the release of “Maze Runner: The Scorch Trials,” the British actress also has a role in “Pirates of the Caribbean: Dead Men Tell No Tales,” due in 2017.

“I play an astronomer and she’s searching for the Trident of Poseidon. She’s on a journey, and she encounters Jack Sparrow along the way,” she said. “It’s a lot of fun. I mean they’re fantasy movies, movies that you remember from your childhood, and the sets are just incredible.”

Peter Marino will soon be donning a new hat: The Robert Mapplethorpe Foundation has asked him to curate an exhibition opening Jan. 26 at the Thaddaeus Ropac gallery in Paris. “It’s gonna be cool,” purred the architect, packed into a full set of leathers, small meat cleaver charms dangling from his necklace.