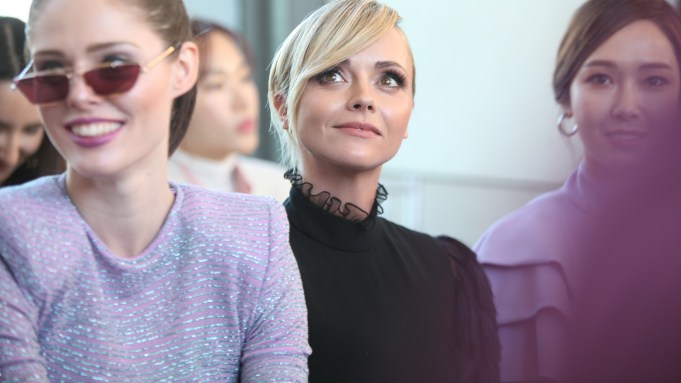 Christian Siriano’s front row was packed with many of his longtime supporters: Coco Rocha was seated next to Christina Hendricks, whose husband Geoffrey Arend snapped away with his camera from his second-row seat directly behind her; Debra Messing reapplied her cherry lipstick and dusted seat mate Mariska Hargitay with a blush brush while waiting for the show to start, and Tess Holliday held court farther down the row.

“When [Siriano] first came to New York, when he was 18, I was amazed at his ability — not only his creativity, but his construction,” said Patricia Field, sneaking her way past the throng of photographers to find her seat inside Top of the Rock. “I said to him, ‘How can somebody so young know what they’re doing like you know?’ And he said to me, ‘I sat next to my mother who was a dressmaker on the sewing machine from this big,'” she continued, lowering her palm a few feet from the ground. “And there it is. And that was more than 10 years ago.”

As for what other shows she’s planning to attend during fashion week, Field offered, “I’m going to go to my favorites. The Blondes.”

For Christina Ricci, Saturday marked her first time attending one of Siriano’s shows.

“I’ve known Christian a long time and I’ve never come to one of his shows, so I was excited to be here and able to come,” said Ricci. “I feel like he’s one of the hardest-working people in fashion. There’s so much in all of his collections for every kind of woman it seems like. And he manages to execute all that with taste and sophistication and style — and his tailoring is really incredible.”

The actress, in between projects, recently finished filming the drama “Percy” with Christopher Walken in the fall. Sounds like there will be a premiere — and need for a dress — in her near future.