The designer drew a star-studded front row to her show on Sunday afternoon at Lincoln Center. 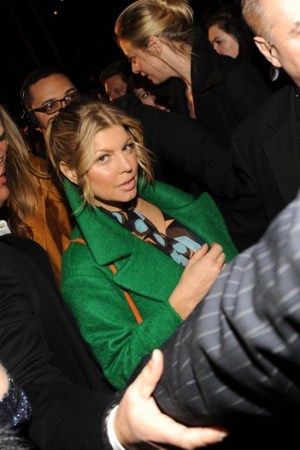 Diane von Furstenberg drew a star-studded front row to her show on Sunday afternoon at Lincoln Center. A slew of powerful women attended and were punctuated by rotating mirrored poles, among them Barbara Walters, Tina Brown and Fran Lebowitz. Patti Hansen arrived with a friend in tow, sporting one of her “Hung on U” bags. “We’re taking Alex and Theodora’s seats!”

Hansen giggled, before heading off. Olivier Zahm arrived right behind Molly Sims, who heaped praise on Furstenberg: “I love her ideas, her fashion…she’s the iconic woman — mother, wife, everything! From Studio 54 to 2011!” Right before the lights went down Fergie slipped in next to Sims, who later nudged the singer when a model walked by in a coat the same kelly green shade she had on.