Janelle Monáe, Zendaya and B. Åkerlund were among the guests at the show. 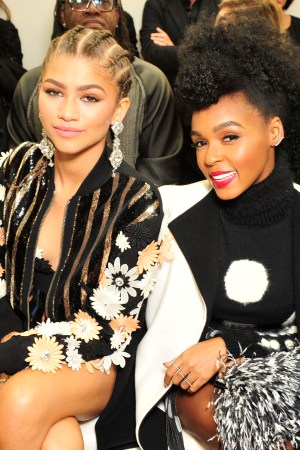 TRANSFORMERS: Fresh off opening for Belgian singer Stromae at Madison Square Garden, Janelle Monáe showed up in Paris on Sunday morning at the Emanuel Ungaro show.

“It was such an incredible moment,” she said of Thursday’s concert. Now it’s back to the studio for the “Dance or Die” singer, who also heads the Wondaland record label. “Right now I’m working on my album and I’m running a record label, so I’m just focused on that,” she said.

Zendaya, despite coming straight from the Kenzo show on the other side of town, had managed to swap outfits. The pop singer ditched the wig she sported at Kenzo, revealing that her hair had been braided since she appeared at the Vogue Paris party the previous night.

B. Åkerlund, shielding her eyes behind a perforated trilby from Ungaro’s fall collection, touted a bag in the shape of a Champagne bottle from Le Snob, the label she designs with Robert Lussier. “It works as many things — purse, Champagne bottle holder and weapon,” she said.

The stylist, whose clients include Madonna, Beyoncé, Lady Gaga and Rihanna, said the lifestyle brand was launching with a pop-up store in the Marais district of Paris. Its offerings include bags, sunglasses, T-shirts, chocolate, towels and perfume.

“Everything is very multi-conceptual, so we have a bag that turns into a dress, we have an umbrella bag, because I don’t like the sun, so you can always be ready to cover yourself up,” she said. “I like to do everything a little bit with a twist and not be so serious.”