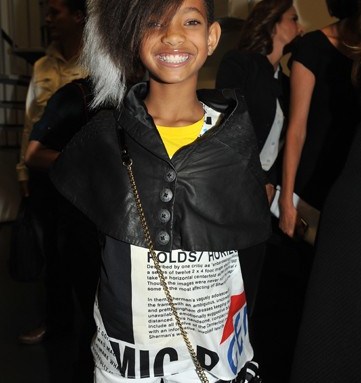 Megan Fox may look über sultry in her Emporio Armani underwear ads, but the actress insists she’s camera-shy and “uncomfortable” having her picture taken. “I don’t think I’ll ever be comfortable, but it’s like acting: playing a part, after all,” she said before the Emporio Armani show.

Fox said she’s taking a break and focusing on her “own family,” referring to her new husband Brian Austin Green, who also took in the show, along with model Amber Le Bon and Pierre Sarkozy, the music-producing son of the French President. Depending on the schedule of Green, who is set to appear on the new season of “Desperate Housewives,” Fox said they are planning a vacation in the Maldives and Thailand.

Jada Pinkett Smith was accompanied by her daughter, Willow, who wore long white and black lace-up socks she designed herself. The nine-year-old has recently caught the media’s attention with her unique personal style. “We encourage her to be creative, and, through this trip to Milan we are giving her the opportunity to see how fashion works and build relationships,” said her mother.