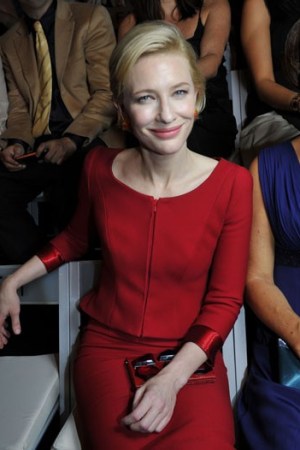 MAIN ATTRACTION: Cate Blanchett and Katie Holmes brought some star wattage to Paris couture week, turning out for their pal Giorgio Armani’s Privé show. The Italian designer is a major financial supporter of the Sydney Theatre Company, run by Blanchett and her husband, playwright Andrew Upton. “I’m about to start rehearsals for our production with Luc Bondy of Botho Strauss’s play ‘Gross Und Klein,’” said the Australian actress, wearing a lipstick red Armani skirt suit with Chopard earrings. Blanchett watched the show seated between Roslyn Packer, widow of the Australian media tycoon Kerry Packer, and Armani’s niece Roberta. Holmes, wearing a black tuxedo-style shirt and trousers, lamented that she wouldn’t get to spend more time in Paris. “I’m only here for the show,” sighed the American actress, whose latest projects include the thriller “Don’t Be Afraid of the Dark,” due out in August and co-starring Guy Pearce, and “Jack and Jill,” with Adam Sandler, scheduled for release in November.