Jessica Chastain learned of her Oscar nomination at the show. 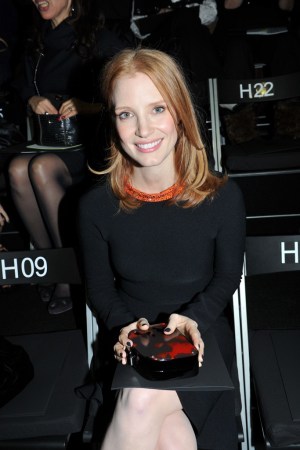 GOLDEN GIRLS: A beaming Cameron Diaz was among the first to congratulate Jessica Chastain at the Armani Privé show in Paris Tuesday for her Academy Award nomination, in the best supporting actress category for her role as Celia Foote in “The Help.” “Brava,” exclaimed Roberta Armani, clapping her hands, while Livia Firth immortalized the moment by snapping pictures on her mobile phone. The actress said she would spend the next three months working on Kathryn Bigelow’s as-yet-untitled thriller about the military’s hunt for Osama bin Laden.

For the third year running, Firth — the Italian wife of Oscar-winning actor Colin Firth — is asking top designers to come up with eco-friendly gowns for celebrities to wear during awards season, in what she has dubbed the Green Carpet Challenge. Brands including Tom Ford, Chanel, Valentino, Stella McCartney, Lanvin and Gucci have joined the initiative, said Firth, owner of the London boutique Eco Age. Armani made her a gown for the Golden Globes using a fabric called Newlife. “The one I’m wearing today is an Armani cocktail dress which is in the same fabric,” Firth said, stroking her black bustier dress. “It feels like silk, but in fact it’s recycled plastic bottles.”

Meanwhile, L’Oréal heiress Liliane Bettencourt and her daughter Françoise Bettencourt Meyers — who are involved in a long-standing bitter family feud — were spotted side by side at the show.