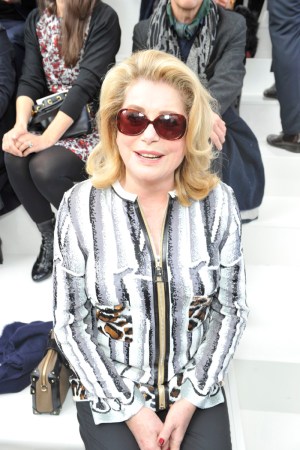 STELLAR ALIGNMENT: The Louis Vuitton show in Paris on Wednesday boasted almost as many stars as an awards ceremony.

Williams was fresh off the French premiere of World War Two romantic drama “Suite Française” and had only good words for her co-star, rising Belgian actor Matthias Schoenaerts. “He’s one of those actors that you have to remember that you’re working with and not watching, because he’s so great,” she said.

The actress is also working on a new project with Kelly Reichhardt, who previously directed her in “Wendy and Lucy” and “Meek’s Cutoff.”

“We’ve seen so many sides of each other, and we’re still incredibly drawn to each other. To me, it’s the greatest success of my professional life to be working with her for a third time,” Williams said.

Meanwhile, Connelly will begin shooting later this year on “American Pastoral,” Ewan McGregor’s long-gestating directorial debut based on the Philip Roth novel. Working with a fellow actor has its perks. “They’re particularly attuned to what other actors go through working on films,” Connelly noted.

Gomez is heading back to Atlanta, Ga., where she recently completed “The Revised Fundamentals of Caregiving,” to work on James Franco’s “In Dubious Battle,” in between recording new tracks. “I haven’t released any music in two years, so it’s really going to be me kind of showing my journey in the past two years, and there’s a little darkness in it,” she said.

Moretz also explored complex emotions for the appropriately titled “Dark Places,” based on a novel by Gillian Flynn and starring Charlize Theron. “She was actually one of the darkest roles I’ve ever done. It was a really interesting character to get into for me, because I went to places I haven’t gone before,” she noted.

Vikander is on the cusp of a banner year, with no fewer than six movies in the pipeline. “I’ve been fortunate in a way to only focus on my work so intensely and not do any of the publicity. And now they’re all going to come out and of course, I’m really excited, because you make the films because you want to have a big audience,” she said.

The Swedish actress is currently filming “The Danish Girl” opposite Oscar winner Eddie Redmayne, who plays transgender artist Lili Elbe. “He’s the most humble and sweet person to work with,” she enthused. “He is doing an amazing job taking on this part.”

Marling has just signed a deal with Netflix to co-write and star in her first TV project, “The OA,” an eight-hour mystery series directed by her pal Zal Batmanglij. “Some of the ideas that we come up with tend to be so dense that packing it all into a feature is kind of complicated, so we’re interested in creating a more sophisticated mind-bender that’s long-form,” she said.

Eliot Sumner, having shed her former band name I Blame Coco, plans to release a new album this year. “I have more of a connection to the music I’m making now, so I thought I would just like start afresh,” she explained.

Belgian singer-songwriter Stromae is heading to Austin this weekend for a U.S. tour that will culminate with a concert at Madison Square Garden on Oct. 1. “We’re going to try to fill it, but I’m excited,” he said.