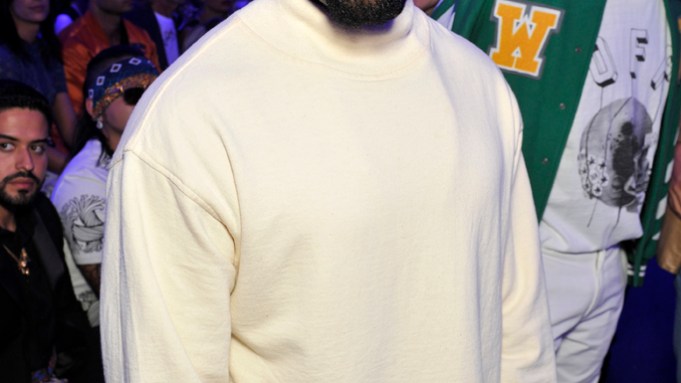 HOTHOUSE FLOWERS: “I hope you think the music is hot, because this building is hot,” Nile Rodgers shouted into the microphone at the Louis Vuitton men’s show in Paris on Thursday. The Chic frontman and producer was acting as unofficial master of ceremonies at the display, for which he provided the soundtrack.
Even though Vuitton had the greenhouse at the Parc André Citroën clad in an air-conditioned casing, the temperature rapidly soared as guests including Zayn Malik, Marianne Faithfull, Kanye West, Joe Jonas, Karen Elson and Paul Simonon squeezed into the venue, which was bathed in blue light.
Thai actor Mario Maurer somehow managed to look cool as a cucumber, despite being swathed in a cream turtleneck and suit.
Will Peltz was in town for the French premiere of his horror movie, “Unfriended,” and will be back on U.S. screens next month in “Safelight,” in which he stars opposite Evan Peters and Juno Temple. He had nothing but unkind words for his character.
“I’m a little bit of an a–hole, to be honest, and I end up bullying Evan throughout the film and make it harder for him. He’s just, like, similar to some of the other characters I’ve played. He doesn’t really have too many redeeming qualities,” said the affable actor.
Not that he’s worried about being typecast as the bad guy. “It’s actually really fun – I love to do it,” he insisted.
Luca Calvani is also embracing his dark side. The Italian actor and his screen wife Elizabeth Debicki play the villains in Guy Ritchie’s “The Man from U.N.C.L.E.,” set for release in August. “We are a very delicious stylish evil couple,” he said. “We try to sell nuclear weapons to the highest bidder.”
Though Ritchie encourages his actors to improvise on set, Calvani checked out some famous screen baddies for inspiration. “There’s some Bond villains of course that I did watch. Some of them are untouchable. I think if you look at Javier Bardem’s latest Bond villain, he was so, like, eerie and creepy,” he said.
Also present at the show were 20 young sales associates from Vuitton stores around the world, cast as bloggers and brought to Paris to visit workshops, design studios, boutiques, quality labs and archives.
The brainchild of chief executive Michael Burke, the initiative is called LVLive, and reaches 19,000 employees via an internal, Instagram-like application. Burke called it disruptive in its use of modern communication tools, cutting out “all the corporate magma.”
Indeed, in lieu of typical management meetings, the employee bloggers – 150 in total, from 46 countries speaking 14 different languages – could share their observations and excitement directly with their colleagues.
“I loved going to the Drôme workshop and actually see them assemble the bags and meeting some of the artisans who have been there for 20 years,” enthused Ashley Johnson, a team manager from Topanga, California.
Burke said bloggers were selected by local juries – with communication skills rather than seniority the benchmarks – and that the immersion project would be conducted twice a year.