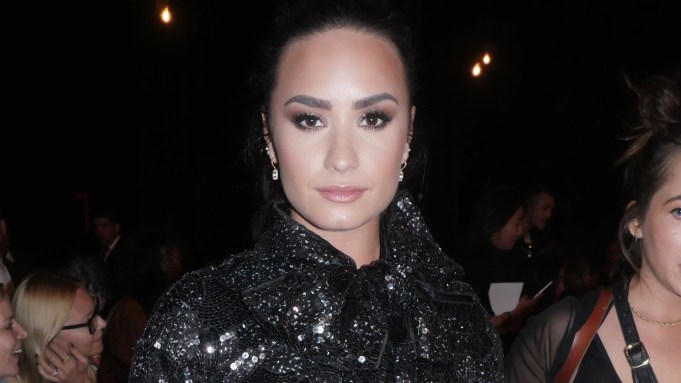 “This is the highlight,” Christina Ricci said, from Marc Jacobs’ spring 2017 show, likely no pun intended as she stood beneath the glow of dangling bulbs staged in the ballroom. Jacobs closed out New York Fashion Week as always, but this season with some changes — his show moved from 6 p.m. at the Park Avenue Armory to 2 p.m. across town at the Hammerstein Ballroom on 34th Street.

Ricci, a usual front row favorite, whittled her appearances down to just Marc Jacobs and Monse, from which she favored “the orange sequin number,” she said as her publicist tugged on her sleeve. Jacobs’ notoriety for promptness had even celebrity publicists nervous the show would begin without their clients perched in the assigned (camera-ready) seats.

“Actually, someone just sent me some pictures from college and I’m wearing a Marc Jacobs sweater,” Ellis Ross said, coming off the step and repeat, moments after Lovato and her posse of assistants breezed by. Ellis Ross wore Jacobs’ resort collection at the VMAs to introduce Rihanna, “It’s been a long relationship, me and his clothes,” she said.

“This is only my third show,” Akerman said. “And me my second,” Gugino added. “We were actually pretty selective in a really fun way, and I guess [my secret to surviving fashion week] has been friends. The fact that we’ve gotten to go together makes it just really…” — at that point, Akerman jumped in: “It makes it fun,” she said, driving home the whole friendship message. “It makes it a fun outing, like a girls’ day.” See, isn’t fashion week sweet?

And for all the editors, bloggers and scenesters whining their way through the collections, Gugino has little sympathy: “Anyone who’s really, truly tired by going to fashion shows might need to address their health issues.”