Astrid Bergès-Frisbey, Julie Depardieu and Marina Foïs were among the guests. 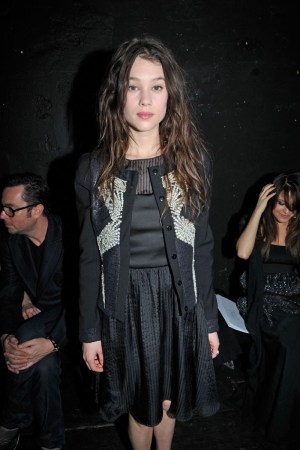 Brooklyn Museum Unveils ‘The Queen and the Crown’ Virtual Exhibit

YOUNG TALENT: The front row at Maxime Simeons Wednesday was like a Who’s Who of young French actresses, with Astrid Bergès-Frisbey, Julie Depardieu and Marina Foïs among attendees. Singers Beth Ditto and Keren Ann were there, as well.

Bergès-Frisbey said for the first time she is taking a behind-the-scenes part (though she didn’t mention what kind), working on a movie with Audrey Dana, in which she will also play an acting role. “It’s the first time I have been involved in a project so early on, while it is still being written,” said Bergès-Frisbey.

The “Pirates of the Caribbean: On Stranger Tides” star, who made her advertising debut with French Connection last year, said she does not plan to do more modeling work, preferring instead to concentrate on her acting.