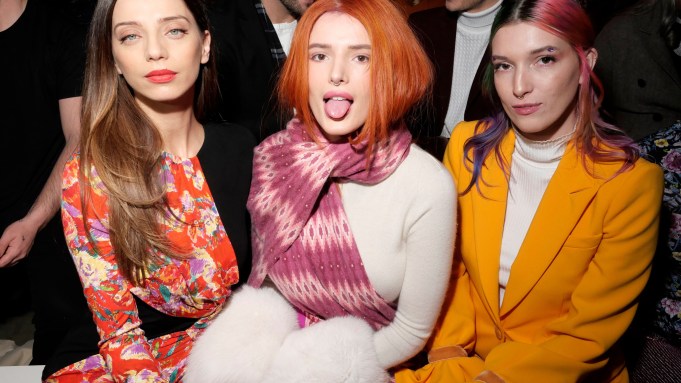 For Jordan Roth, going to fashion shows is a theatrical experience. And just like in theater, costuming is integral to stepping into character.

“I just love the energy and life and the color and joy that comes from his clothes,” said Roth before taking his seat at Prabal Gurung’s show at Spring Studios on Sunday night, himself dressed in a cherry red and yellow garment by the designer. “As soon as I put this on, I thought, yes! Everything lifted. The color helps, especially in winter; this weather in the city can close us all — color really opens us, opens me, opens my heart, opens my body, opens my soul.”

And it doesn’t stop there.

“It’s not just the clothes: it’s the energy of the crowd, it’s the feeling when you walk in the door and you see what kind of environment they are creating for us. It’s the music, it’s the light, it’s the casting, it’s exactly like a piece of theater, and it affects us emotionally, viscerally, narratively in the same way,” he added. And what’s a piece of theater without its audience?

“The theater requires an audience to complete its project and I think that’s all true of fashion shows. The audience is very much part of creating the experience, part of creating the piece of theater. If you watch a rehearsal of this, extraordinary models going up and down these runways in extraordinary clothes, with nobody here, that’s not what we’re talking about. We’re talking about the people. You are the last cast member to join, as we all are, and then it ignites.”

The theater producer will be casting audiences for a few new productions this spring.

“We have a great new musical called ‘Hadestown’ that was just at the National Theatre in London and coming to the Kerr, and ‘Moulin Rouge.’ You are not ready,” Roth detailed.

Billy Porter sat with other members of his “Pose” cast as other show attendees — Bella Thorne and her sister, Dani,  and Angela Sarafyan — took their places nearby down the row. “This is my first fashion week, and I’m just going to everything and living my high fashion dreams,” Porter said.

Asked how the reality of attending shows lives up to expectation, Porter, who was also the ambassador for men’s fashion week, noted that the experience was much busier than he anticipated.

“Like, there’s a lot more going on than you know. There’s something every day, all day, all around the city. It’s not just in one place anymore — I don’t know if it ever was. I’m new to this — the different way that people express themselves through choice of venue even has been really interesting. It’s been a lot of fun.”

And as for how he’s been managing his show schedule?

“My stylist does all of that,” he said, not skipping a beat. “I just go where they lead me.”