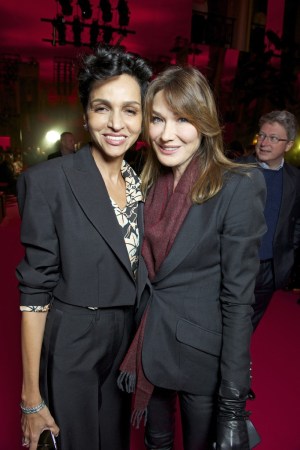 TICKLED PINK: Alice Eve came up with a novel way to beat New Year’s blues this year: She tied the knot.

“It was the best start to the year, because I never liked New Year’s Eve and now I love it,” she said at the Schiaparelli haute couture show in Paris on Monday.

The British actress married Alex Cowper-Smith on Dec. 31 wearing a custom-made Temperley dress. “It was the most beautiful dress I’ve ever worn,” she enthused.

Eve confirmed she would star in the follow-up to “Star Trek Into Darkness,” set to film in Vancouver later this year. She will also be seen alongside Kevin Costner and Gary Oldman in “Criminal,” due out next fall.

As pink light bathed the venue, Carla Bruni-Sarkozy struggled to locate her seat. She thought she had finally found it, and began chatting animatedly to her neighbors in Italian. Schiaparelli spokeswoman Farida Khelfa appeared and mock-chided her: “You’re in the wrong seat. It says Carla Sozzani — allo?”

Once settled into her rightful place — next to Italian entrepreneur Diego Della Valle, who owns the brand —Bruni-Sarkozy confided she was focusing on music, following her husband’s return to the political spotlight (former French president Nicolas Sarkozy was elected head of the opposition conservative UMP party in November).

“I just finished touring, and I’m writing a new album and I’m working with some new music,” the Bulgari brand ambassador said.