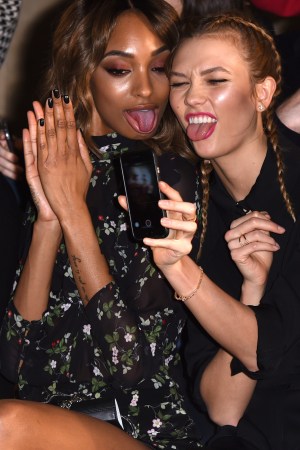 “Why are you so tall?” pouted Jourdan Dunn to Karlie Kloss as they posed for photographers before taking their seats at the Topshop Unique show next to fellow model Lara Stone.

Stone had recently departed from her regular fashion beat for a flirtation with film. “I’m going to be in the ‘Absolutely Fabulous’ film,” she told WWD. “I had so much fun [filming the scene]. I appear as myself in a dream sequence, as part of the ultimate girl gang. Kate Moss and Jourdan [Dunn] and Stella McCartney were all there, too.”

Lucky Blue Smith was sitting between Lottie Moss and Olivia Palermo. He had recently been the victim of some negative attention on Instagram. “My friend’s dad is sick with cancer and they can’t afford the treatment so I posted a picture of their Go Fund Me page asking people to donate,” he told WWD. “And some guy posted a really negative comment saying that I’m one of the richest kids in the world and said I should pay for the treatment. That’s just not right. But they are managing to raise lots of money so that’s good.”

Singer Caroline Vreeland said fashion had become a bit of a distraction from her music career. “I have been going to a lot of shows and shooting editorials but I think it’s time for me to take a step back and focus on what’s most important, which is my music,” she said, adding that she’s had to start from scratch on her new album because of a disagreement with her producers. “I’m going to hunker down and stay in L.A., which I never do. I don’t even own a couch in my apartment because I haven’t been in there since I moved in on Dec. 1. I’m never home. So I’m going to stay put and write; I need that for my soul. I just went through a break up and I have already written two songs about it.”