The fashion pack may have looked a little bleary-eyed at Valentino’s couture show this morning, but Anne Hathaway was fresh as a daisy. 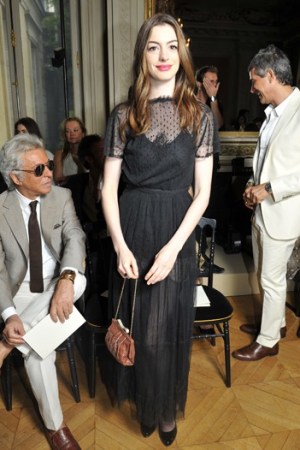 RISE AND SHINE: The fashion pack may have looked a little bleary-eyed at Valentino’s couture show this morning, but Anne Hathaway was fresh as a daisy. “With this week, I think, everybody feels a little bit bedraggled, but it’s always exciting,” she beamed. The actress said she has spent the last few months playing Catwoman in “The Dark Knight Rises,” and her costume was only one of the perks of the job.  “Everything about the part is the coolest thing ever,” she enthused. Amanda Peet was less chatty. Asked to describe the premise of her upcoming NBC sitcom “Bent,” due to start airing after Christmas, she said: “I’m a lawyer. I fall in love with my contractor.” Peet was similarly succinct about her role in Terrence Malick’s as-yet unnamed new film. “I play opposite Ben Affleck and I’m an ex-lover of his,” she said.