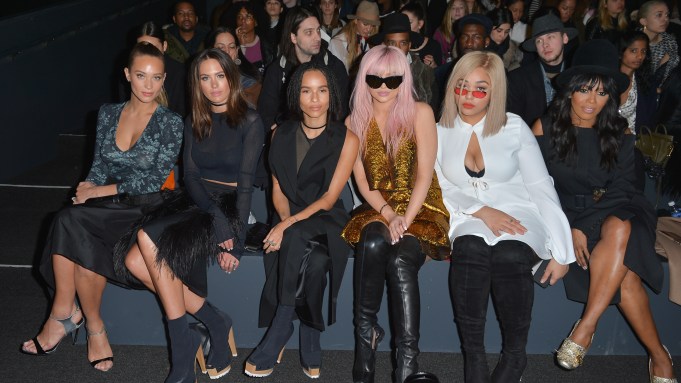 It was barely 11 a.m. on Tuesday morning and Kylie Jenner was wearing a glitter-gold minidress, thigh-high platforms, gigantic sunglasses and pink-tinged hair. Understated.

She was sitting front row at the Vera Wang show, her second fashion week appearance since Saturday’s Alexander Wang show. Fellow Wang Gang member Zoë Kravitz was further down the row; Hannah Davis was also nearby.

“This is my first and only show,” Davis said, glowing on a neighboring bench. “I was just backstage and this collection — I want everything in the collection and I’m not just saying that!”

Davis saved the one fashion week show she attended for her favorite designer. “I love that there’s always that feminine aspect to her collection, but it’s very rough and tough and very tomboy,” she said. “I just love that contrast, between boyish and really feminine. That’s sort of how I dress a lot of times.”

The Sports Illustrated Swimsuit model, who revealed her engagement to Derek Jeter in November, continued that Wang’s designs echo her own personal style. “My day-to-day is very much like T-shirts, jeans, Rag & Bone jackets,” she said. “I love accessories, coats and shoes. But when I get dressed up I like that balance between girly and boyish. Like having a really amazing dress but pairing it with combat boots or something really unexpected.”