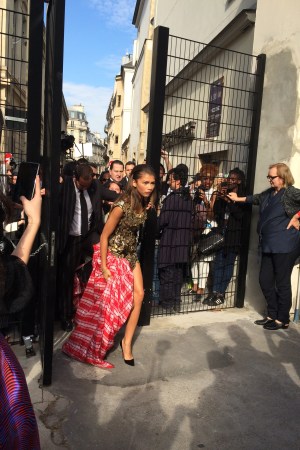 CLIMATE TALK: Zendaya slalomed her way through a crush of fans to get in to the Vivienne Westwood show on Saturday.

“It’s my first fashion week here, so I want to explore,” said the 19-year-old American pop singer and actress, who starred in the Disney Channel’s “Shake It Up” television series.

“That was crazy,” said musician Kazembe Coleman, her father, amazed at the frenzy whipped up by her arrival.

Westwood’s spring 2016 collection was dubbed Mirror the World, and its message was about saving Venice, which is sinking due to climate change, an issue Zendaya feels strongly about.

“It’s key, because we are the future,” she said. “We’ll have to live on this earth, so we’d rather maintain the planet so that we have a place to live.”

Paul Watson, founder of the Sea Shepherd Conservation Society, was present, attending his first fashion show. He said the society works closely with Pamela Anderson, who set up an introduction with Westwood.

“We share the same interest in trying to find alternatives to products that harm [the environment],” he said, explaining the non-governmental organization for marine wildlife conservation is plotting a coup at the Paris climate summit in December.

“We’ll have a giant blue whale on the bank of the Seine, near the Eiffel Tower,” he said, adding key to addressing climate change is revitalizing marine life.

Will the Sea Shepherd Conservation Society enter Paris in a tank like Westwood parked recently outside of British Prime Minister David Cameron’s house?

“No, but we’ll have our vessel Brigitte Bardot, our boat named after her,” he said with a laugh.