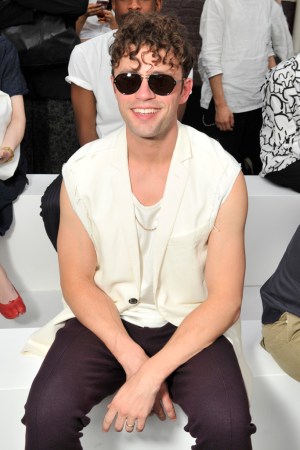 B-BALL STYLE: Damian Lillard joined the team of NBA stars who took in the Paris men’s shows this season, though the Portland Trailblazer said he hasn’t been “big on like fashion.”

“Some of my colleagues are lot more fashion-forward than I am,” he smiled, sitting next to model Soo Joo Park. “This is my first show ever. I’m not that deep into it. It’s fresh for me, but hopefully this will be a start,” said the point guard, sitting front row at Y-3 on Sunday.

Lillard was in town at the end of a two-week promotional tour for his new signature sneaker with Adidas. “It’s the shoe that I play in, but that you can also wear off the court,” he explained, adding that a related apparel line was already in the works.

Among other guests at the show were Mikky Ekko and Joseph, a member of Chinese boy band The Fresh. The 17-year-old was inseparable from his basketball, admitting – after having a hard time showing off tricks for interested photographers – that it was more for decoration than action.