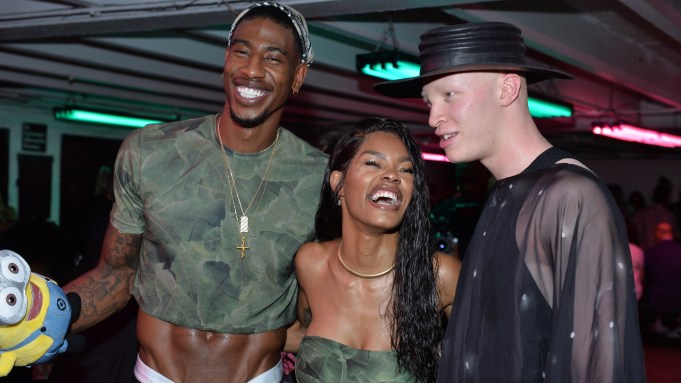 Professional basketball isn’t the only game that Iman Shumpert plays.

“One second, I gotta catch this Aerodactyl.”

Before the Baja East show on Friday night, Shumpert was hard at work playing Pokemon Go while his wife, Teyana Taylor, was on nearby peacock duty. “[When] she got to do all this, this is what I do,” clarified the basketball player. The couple had come out in cropped camo-print Baja East wares. “We’re big fashion geeks. Naturally when [Baja East] gave me a shirt, I cropped mine, too. We’re going to do the stomach thing for tonight. I work hard,” he said, flexing his six pack.

A stuffed Minion doll was nestled in the curve of his left arm. What was a Minion doing in the front row? “Scott and John let me take one. There’s a whole lot of them falling out of trucks [upstairs],” Shumpert said, offering a preview of the post show party.

Scott Studenberg and John Targon had taken over the parking garage at 25 Beekman Street for their spring show, which lured not only Pokemon, but also Chanel Iman, Mia Moretti, Jamie Chung, Sophia Bush and Travis Mills. And, apparently, an army of Minions.