Tilda Swinton, Katy Perry and Kristen Stewart were among the front-row guests at the event. 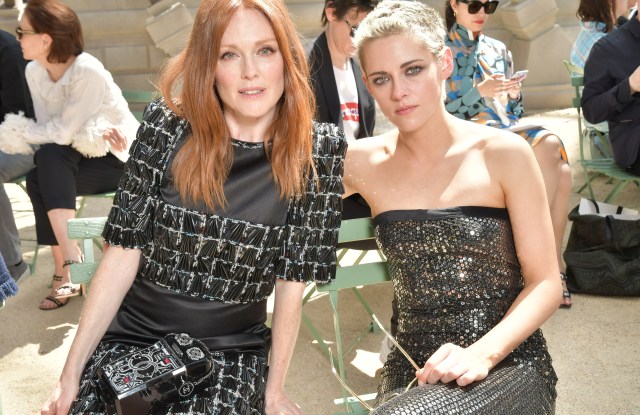 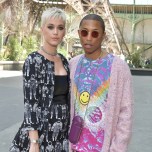 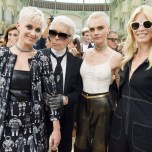 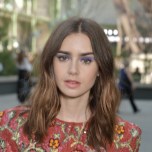 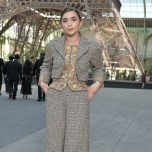 FASHION MONUMENT: “It’s like Vegas in Paris,” said French actress Pom Klementieff of Chanel’s latest show set extravaganza: A reconstruction of a section of the Eiffel Tower. Even the most seasoned of Chanel show-goers was gobsmacked.

“It’s quite extraordinary, coming through the door into the Grand Palais….I mean for anyone who’s not been here, it’s a pretty awesome space, but to imagine someone saying, ‘Let’s build the first couple of storyies of the Eiffel Tower with, by the way, a cloud at the top of it’….It really takes my breath away,” said Tilda Swinton. “It’s beyond, and there’s something really beautiful about this show, this setting. This whole Robert Delaunay kind of Orphist sensibility right now in Paris, that feels really, really touching. I thought it was bang-on.”

“I’m totally blown away. This collection was a total throwback, the shapes, the hats, the boots, the colors on the eyelids…. I think it’s one of my favorite Chanel shows,” said Lily Collins, who has been up the real Eiffel Tower two or three times. “But I didn’t get to visit it this time, so now I get to sit under this one, it’s kind of like being there,” added the actress, who loves Paris by night: “Seeing the city, crossing over the bridges, going down the side streets.” Of her latest role in “To the Bone,” due out on Netflix on July 14, in which she plays a young woman with an eating disorder who goes into a recovery home to get better, she said: “It’s starting a really important conversation about a taboo topic. It was a very intense, personal experience.”

Meanwhile, Rowan Blanchard had been getting in some sightseeing before the show. “I’ve been a Francophile all my life and I love French movies, so to get to walk around the city is breathtaking….We had this amazing moment where we were walking toward the Louvre and ended up on the Ferris wheel and there we were up in the air with music playing and clear skies,” said the actress, who is working on an “art diary book project” with Random House. “I’ve been really inspired by what Millennials are into. I think there’s something really specific about my age group and how we’re so committed to making art even when people tell us there’s a certain age limit or you have to do this to be a real artist,” she said. “There’s a lot of writing, photos and poetry, everything I love. It’s been a special personal project that I’m really nervous about but excited to put out there.”

Blanchard said she’s been “exploring self-portraits, trying to explore myself through the camera.” She rejected the term ‘selfie,’ though. “No, it’s on a film camera, with a timer. I think a selfie can be a self-portrait, we live in a really interesting time where we all have access to cameras on our phones, and there’s so much we can do with that. But for me photography is photography, although selfies have helped me explore how I want to be viewed and portrayed.”

Katy Perry and Sofia Coppola both brought their mothers along to the show. “We brought mom, she’s never been to a fashion show before, so we had to make sure she started at the top,” said Perry, adding: “I just flew in yesterday from Australia so I’m, like: ‘Is that the Eiffel Tower? Or did they cut it especially for him?’”

Coppola, who was making sure her mother stayed hydrated in the baking greenhouse-like conditions, said she was looking forward to summer break. “My husband’s French so we’re going to visit his relatives, and we’ll also go to Italy. My dad [Francis Ford Coppola] has a small hotel in Bernalda in the South of Italy so we’ll be heading there.”

Kristen Stewart was happy to finally get up close to the structure. “I’ve actually never been up the tower, there’s a lot of people over there, you know. It’s pretty crowded,” said the actress, who confessed the perks of her celebrity status include getting to hang out with Karl Lagerfeld. “Being in his library with him, that’s the most fun I’ve had. He probably has about 8,000 books in there and he can tell you where every single one of them is and throughout the day, people have to keep him on track because he’ll be like, ‘Oh wait, I want to show you something.’ We joke around, like, ‘When’s Karl going to get here? Maybe 5 p.m., maybe 10 p.m…. He’s probably studying ancient Flemish right now, he’s probably designing a chair.’

“We did this fragrance campaign and there’s a commercial that goes along with it and I saw him yesterday, he was in the middle of dressing models for the show, and he was like: ‘Have you seen the film?’ And I was, like, ‘Yeah, yeah.’ And he said, ‘Yes, but it’s not your feet.’ And I was like, ‘What do you mean?’ (There’s one shot of a close-up of my feet, and they used a double, I don’t know why.) And he was, like: ‘Why would they do that to you?’ And I said, ‘I don’t know but how do you know what my feet look like?’ and he said, ‘Of course I know, those weren’t your feet.’ It’s insane, he sees everything.”

“Hanging with Karl,” said Pharrell Williams, picking up the thread. “One of the most amazing times was when he invited us over to his photo studio and he took us into his library and started sketching everything that he felt I should be wearing for this visual piece we were doing for the movie for the Gabrielle bag. And that’s what I ended up wearing, and that’s the brilliance of what he does. The guy is just a genius of detail.”

Visibly moved by Paris Mayor Anne Hidalgo decorating Lagerfeld with a Grand Vermeil medal, the city’s highest distinction, at the end of the show, Claudia Schiffer said: “It’s very well deserved because he is a genius in fashion, he is a living legend.” The perennial top revealed that she has a Rizzoli book due out in October gathering “the best photography from across 30 years of her career,” including lots of pictures by Lagerfeld. “He really deserves all the honors that the world has to give, he’s always been on top of his game, he’s never gone up and down like other fashion designers,” added Schiffer. “He’s always been on the top, top, top. He’s one of the only ones with this level of longevity and consistency, it’s incredible.”