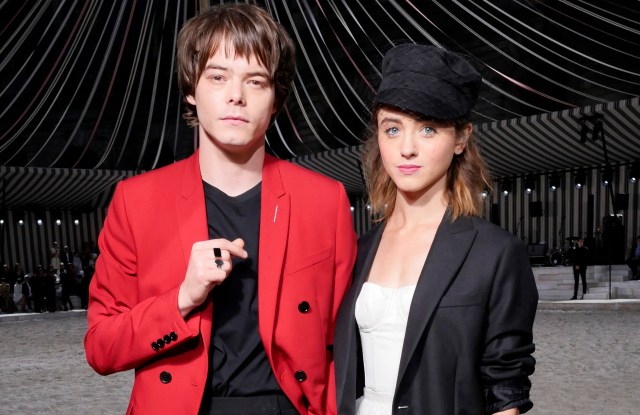 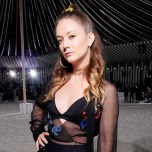 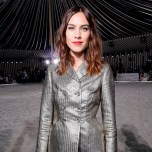 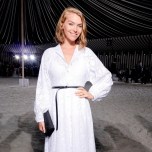 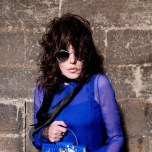 SPIRITED ELEMENTS: The rain hadn’t really begun in earnest when guests trickled in through a cobblestone alley to take their seats lining the white sandy ring for the Dior Cruise show.

“Maybe we can find an umbrella somewhere,” Billie Lourd laughed as she hunted for her seat. The actress is gearing up for her eighth season of “American Horror Story” and working on a movie called “Booksmart,” directed by Olivia Wilde.

“She’s a goddess! I’m so excited,” Lourd said with a grin. Surveying the arena on the grounds of Chantilly’s historic stables, she professed her love of horses but said she can’t be around them for long.

“I’m allergic and it’s the saddest thing ever, but honestly, I’ll still go on them because they’re so beautiful,” she said wistfully.

“I used to keep my horse in a much smaller affair,” noted Alexa Chung as she entered the 18th-century edifice, built by the Prince of Condé, who expected to be reincarnated as a horse.

Florence Pugh, who plays a wrestler in the upcoming film “Fighting With My Family” glided through the hubbub, as the raindrops thickened, her hair pulled up and elegantly woven in the back.

“I grew up on horses. I used to live in Spain where I did proper ‘El Campo’ horse riding — it’s great,” she said.

After the show, Arizona Muse also recalled growing up on horses, as she gushed over the spirited performance from the escaramuza riders, who crisscrossed the ring in elaborate formations, with their lace skirts bouncing, on lively white horses: “I loved it!”

“When I walked in, first I smelled them and then I thought, ‘Oh no!’ It’s gonna be horses — and I couldn’t wait!” said Muse, adding she hopes to ride regularly again one day.

Mia Moretti, who heads off on a tour in South Africa with Katy Perry this summer, waxed poetic.

“She looks at them adoringly — as monetary value only,” she quipped.