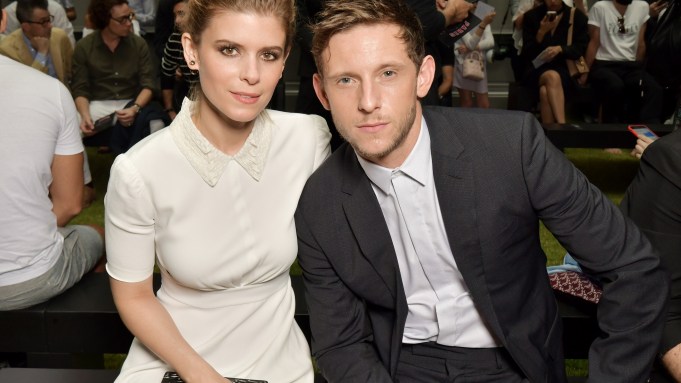 Jamie Bell kept a cool head despite heavy police reinforcements around the Grand Palais venue of the Dior Homme show on Saturday. The roads around the site had been blocked off due to a series of promotional events around Paris’ bid to host the 2024 Olympics. But he’s had good training. The actor in his latest film, “6 Days,” plays a member of the SAS, Britain’s counter-terrorism unit, that went in on the Iranian Embassy siege that took place in London in 1980. “It was a very specific moment in British history where Margaret Thatcher wanted to flex her military muscle.”

Christian Slater was taking in the intriguing show set, with fresh grass underfoot and rows of curtains of glistening black tape overhead. “An interesting choice, but it’s cooler in here. I’m looking forward to seeing what kind of characters come out.”

Dressed in a gray suit and sneakers, the “Mr. Robot” star said he’ll soon be heading to London to rehearse for a play in the West End due to open in September, which is still under wraps. “The stage is definitely my first love, and it’s one of the classics, a dream-come-true situation,” he teased.

Asked if he was into fashion, he replied: “Over the last couple of years, I’ve seen the value and importance of it, and the difference it makes. It’s incredible, when you put on clothes made by phenomenal tailors and designers, with wonderful materials, it does change and affect everything.”

It was the first fashion show for rising star, Irish actor Barry Keoghan, meanwhile. “It’s weird, it takes getting used to. But it’s nice, all the different styles,” said the actor, who stars in Christopher Nolan’s latest movie, “Dunkirk.”

“I love the smell of the grass, it’s doing me good,” said ballet dancer Marie-Agnès Gillot, who shared some color on a capsule she has designed for Petit Bateau. Gillot will perform a piece she choreographed with fellow etoile dancer Alice Renavandat at a cocktail celebrating the hook-up in the Palais Royal gardens on July 3.

“I love the brand and wear a lot of their cotton basics but I really had fun with the capsule. There’s a short jacket, a hat, and a dress for little girls inspired by the one I wore to perform in ‘The Nutcracker’ as a girl. It’s navy with stars in the tulle. Then there all the dancer-inspired pieces like the leg warmers,” she said.