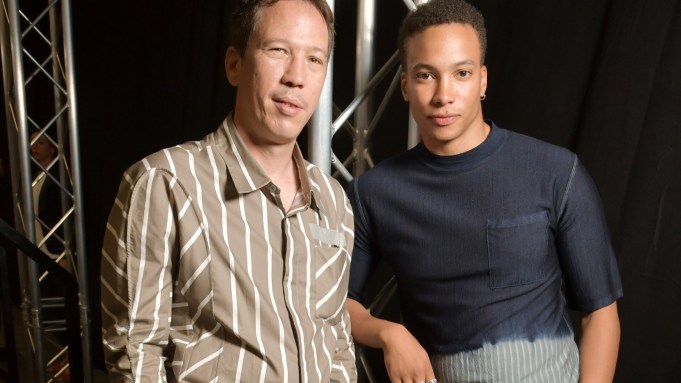 MARINE LIFE: The front row at Lanvin’s fashion show on Sunday was leagues above the setting of Reda Kateb’s next movie: a submarine.

“I play the role of a commander of a nuclear submarine,” the French actor specified, adding that to prepare for the role he had gone into a number of boats and spoken to people. “It’s very interesting.”

The filming of the movie, called “Le Chant du Loup,” directed by Antonin Baudry and also starring Omar Sy and Mathieu Kassovitz, is taking place entirely in France — in Brest, Toulon and a Paris suburb.

Kateb doesn’t go to many fashion shows, but is a fan of Lanvin so he went along to its display. “I like to wear its clothing,” said Kateb, adding he also is partial to Agnès b.

Kateb is in the film “Django,” which is heading abroad after a run in France. Next up is Montreal, in a week.

Other attendees included Corentin Fila and Haider Ackermann. It was Gabrielle Union and Dwyane Wade’s last show in Paris before the couple heads off on a Mediterranean cruise.