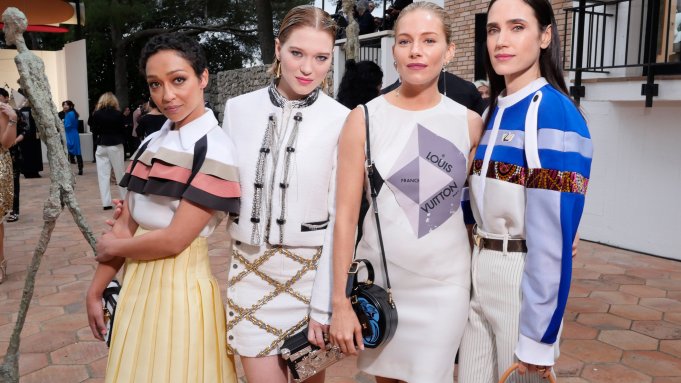 ART ATTACK: Louis Vuitton convened a gallery of A-list faces for its cruise show on Monday, held at the Fondation Maeght in the village of Saint-Paul-de-Vence near Nice.

Emma Stone was reunited with Justin Theroux, her co-star in the upcoming Netflix series “Maniac,” though she seemed keen to quash any rumors of romance. “He’s like my brother. It’s really fun,” she said of hanging out together off-set.

“It was incredible. I mean, I feel like I learned so much in such a short period of time, which was amazing,” Stone reported, hinting that a new Vuitton perfume campaign may be in the works.

“I’m working with Louis Vuitton for fragrance as well,” said the actress, who recently appeared in her first Vuitton advertisements. She added that rose — a key ingredient in the brand’s Rose des Vents perfume — is one of her favorite scents.

Though Theroux was discovering the site, a private foundation established in 1964 by art dealer Aimé Maeght and his wife Marguerite, the actor is a keen connoisseur of the subject.

Taking in the garden setting, studded with monumental sculptures by Joan Mirò, Jennifer Connelly said she was excited to discover not just the museum, but also the neighboring village, famous in the Fifties as a magnet for artists like Pablo Picasso and Fernand Léger — not to mention film stars including Charlie Chaplin and Orson Welles.

“I had a little tour around, but I haven’t had enough time to see the full collection yet,” said Connelly, adding that she was drawn to the Alberto Giacometti sculptures in the courtyard.

Her voice was featured on the show soundtrack, composed by French musician Woodkid, reading extracts from “Grace: A Memoir” by Grace Coddington, who collaborated with Ghesquière on a line of accessories featuring her drawings of cats and dogs.

The actress will be seen later this year in Robert Rodriguez’s sci-fi spectacular “Alita: Battle Angel.” Connelly plays the cyberphysician Chiren in the film adaptation of the Japanese manga of the same name.

“She’s kind of a bit dastardly but ultimately has a good heart — not to give too much away – so it was a fun character for me to play,” she said.

Ruth Negga, meanwhile, was gearing up to play Hamlet at the Gate Theater in Dublin in September. “I’ve already played Ophelia before — I’m having a crack at Hamlet now,” she said. “Why not?”