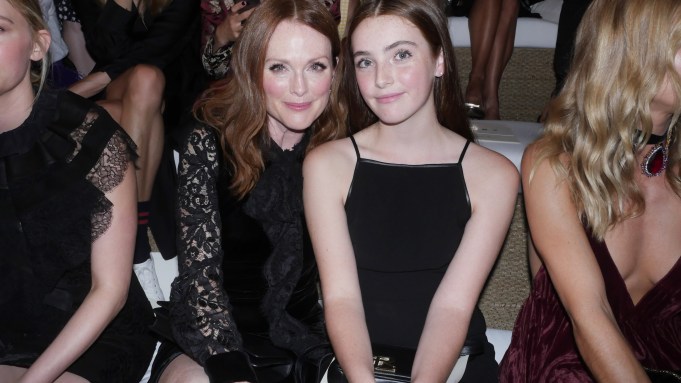 Security was high on Madison Avenue between 71st and 72nd Streets Wednesday night. Ralph Lauren had erected a tent of sorts in front of its Madison Avenue flagship, shutting down the entire block as a result. The neighborhood plebes gathered around the barricades boxing in the Mansion, hoping for a glimpse of fame — not that they had any hope of seeing the flash of glamor inside.

Sitting in the front row, stadium-style on the sidewalk, was a small but notable crew: Julianne Moore with her daughter, sitting next to Ricky Lauren; Annabelle Wallis; Haley Bennett, and Jessica Alba, next to Lauren Bush Lauren and David Lauren on the end of the row.

“I loved that black dress with the brown leather straps on it, did you see that one?” Moore gushed post-show. The actress, who’s set to start shooting the Coen brothers’ “Suburbicon” directed by George Clooney, had also attended Tom Ford’s show a week earlier. What does an actress observe during a runway show, what stands out? “I think because I’m an actor, I look at the match between the model and the outfit. I try to see why they were paired, what it is about that particular model and that particular outfit,” she reflected. “Clothes are obviously indicative of personality, or are a way to communicate how we’re feeling, or who we’re feeling like at the time.”

The front row had all been dressed by the designer before the show; Bennett had chosen a Western-inspired frock. “I recently did a Western last summer, and feel like it’s really reminiscent of some of my costumes, but in a wearable way,” she said.

For most of the VIP front row, Ralph Lauren was a rare fashion show appearance. “The most important thing, and the only way I’d ever go to a show is if I love a designer,” remarked Rosie Huntington-Whiteley, who also wore a custom Ralph Lauren gown to this year’s Met Gala in May. “I think you’d be hard pressed to not put him in the top-three most iconic American designers of our time. I got to spend some time with Ralph himself in the summer, just get to know him — he’s such a gentleman, and a real icon to me. I grew up knowing who Ralph Lauren was. It was one of my first fragrances as a little girl.”

“You have relationships with different brands, and you honor those by going to [their runway show],” said Wallis. “I do this show called ‘Peaky Blinders’ and [Ralph] is a very big fan of it, so he asked me to come. I was very flattered, so here I am.” The actress has three movies coming out soon: “The Mummy,” with Tom Cruise; “King Arthur,” and “Come and Find Me,” with Aaron Paul. “I’ve got a little time off before I make my choice of what I do next,” Wallis added. “I’m quite tired; I’ve been running around like a crazy person.”