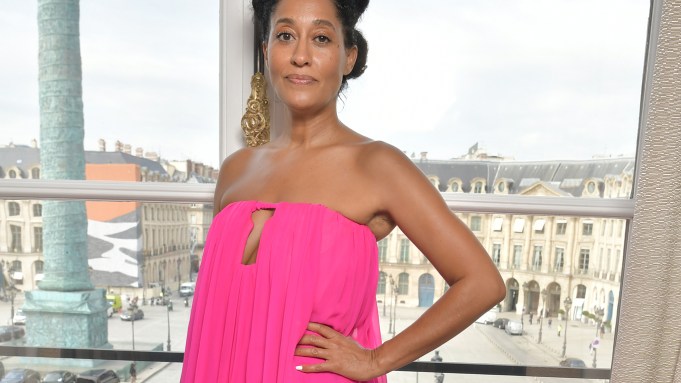 Among them, Tracee Ellis Ross, who had stopped in Paris before jetting to Italy for a vacation, was sporting a strapless gown and matching suede shoes with a heart-shaped cutout across the foot.

“I’m obsessed with these shoes, I’m hoping to steal them,” the actress and model said. “Or buy a pair.”

Rossy de Palma, accompanied by her daughter Luna, also worked the theme in a hot pink blouse and matching flower in her hair.

“It’s her first couture défilé, she’s so excited,” she said of her daughter. “I’m living this with such enthusiasm, as if it was my first time.”

De Palma is soon to appear in Amanda Sthers’ “Madame,” out in November, in which she stars alongside Harvey Keitel.

Another guest with a footwear focus was Daphne Guinness, who sported a pair of sky-high purple sequined heelless platforms. “I designed these with my friend Noritaka,” she said, referencing the designer Noritaka Tatehana. “These are my singing shoes,” said the heiress, who has just finished mixing her second album.

George, an Australian-American actress, is taking some time out to focus on her kids right now, she said. “I’m on a bit of a pause, being a full-time mamma. I’m reading lots of scripts, but I’m not ready to go back yet.”