"I tend to be a bit of a perfectionist with my work," Margolis conceded as she studied the sculptures snaking up the storefront of the M Missoni store. 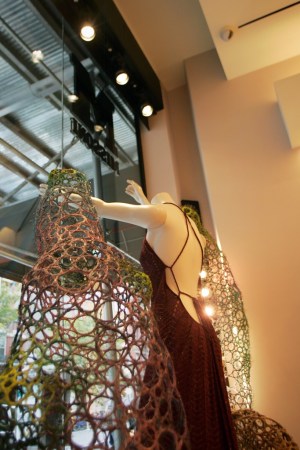 A Look at the Leading TV Shows and Characters Influencing Wardrobes

FULL CIRCLE: “I tend to be a bit of a perfectionist with my work,” Karen Margolis conceded, wringing her hands as she studied the trio of sculptures snaking up the storefront of the M Missoni store in New York’s SoHo neighborhood. It was Wednesday afternoon, a little more than 24 hours before the artist’s series, created for the store and inspired by the brand’s resort collection, would be unveiled with a store party. She had completed the series four days earlier. “I’ve never had a deadline before with my work,” she said.

Margolis spent much of her summer holed up in a shoebox-size studio in Gowanus, spending up to 14 hours a day, seven days a week working on the project. “Once I’m immersed in something, I almost get a little manic about it,” Margolis said. She was tapped by the brand through a collaboration with hip Lower East Side gallery Garis & Hahn, who have been championing the emerging artist for some time. “I’ve had my eye on Karen ever since we opened the gallery,” Sophie Hahn said.

There are seven sculptures in the series, varying in scale — from paperweight-size to 7 feet tall — with each comprised of variously-sized wire circles, hand-dyed in an ombré of Missoni signature hues. The three largest pieces are reminiscent of oversize bubbles (the kind you make with big bubble wands) in shape and curl up the storefront. Spiky copper wires blossom out of them like hair, giving the series an organic feel. The smaller sculptures, scattered around the store, have the same bubblelike wire structure. Three look like effervescent bowls spewing out tattered, dyed paper.

The sculpture series will be on view until Monday, during which customers will be able to preorder the resort collection.