The historic furrier is marking its rebirth under new designer Andrew Heather with a freestanding boutique on Paris’ Avenue Montaigne. 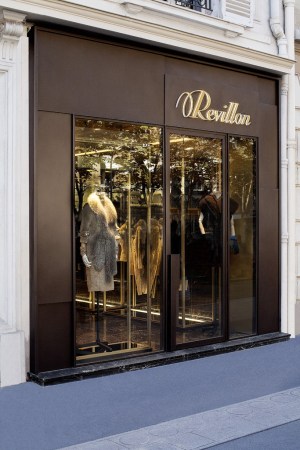 Jenni Kanye and Malia Mills Are Courting Shoppers in the Hamptons

FUR FLASH: Historic French furrier Revillon is marking its rebirth under new designer Andrew Heather with a freestanding boutique on Paris’ Avenue Montaigne. Architects Gilles & Boissier designed the 500-square-foot store at number 40. Its style is intended to evoke “warm luxury,” according to the brand, and features solid brass fixtures and mirrors edged in gold leaf against a brown marble floor and brushed cedar elements.

To celebrate the event, Revillon has reissued a limited-edition series of its Detchema fragrance, originally launched in 1953. Available exclusively in the new store, which quietly opened in mid-September, only 1,000 100-ml. units of the scent have been produced, each retailing for 180 euros, or $234 at current exchange. Housed in a reinterpreted version of its bottle design from the Seventies, the fragrance’s formula remains unchanged.

This story first appeared in the September 26, 2012 issue of WWD. Subscribe Today.
You're missing something!
SUBSCRIBE NOW