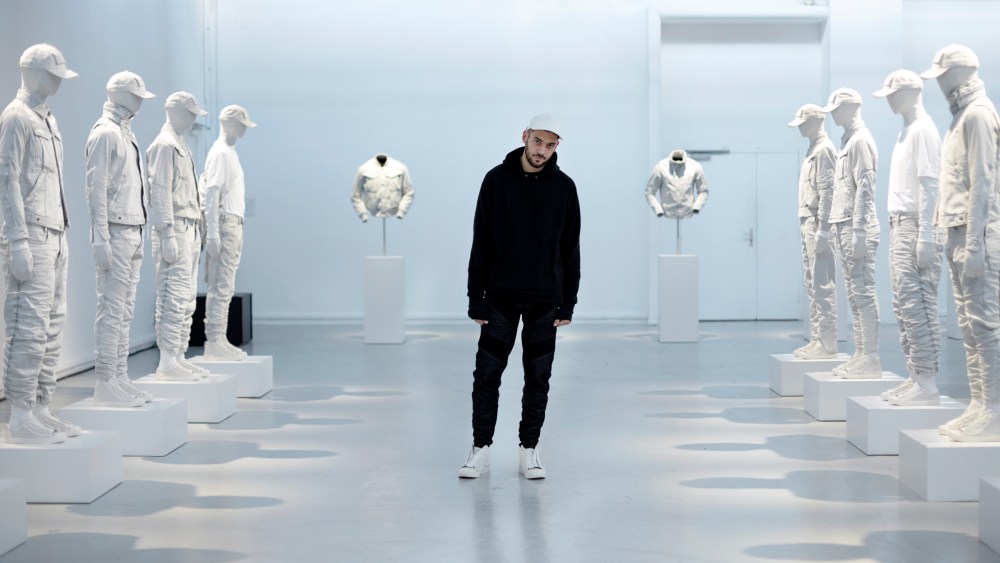 SWAT TEAM: Aitor Throup plans to push research and innovation to the fore in his new role at Dutch denim brand G-Star Raw. Throup revealed his first Raw Research capsule in his official role as executive creative director of the brand (he had been a creative consultant for G-Star since 2013, and was behind the first Raw Research capsule launched last June) on Thursday during the men’s collections in Paris.

Throup chose to show the stark capsule like a monochrome art installation on the upper level of the Palais de Tokyo in order to focus on the product, rather than the event.

“We’ve put so much work into these garments that we want them to be the focus and you to oscillate round them,” said the designer.

Indeed, although there are only four pairs of jeans and four jackets, as well as a t-shirt, cap and sneakers, both done in black or severely bleached denim, the installation on mannequins and the muted light forced the observer to focus on the ergonomic details of the designs in order to tell them apart.

The collection, which will launch in June in select multi-brand stores, ranged from ribbed motocross pants with leather panels to a reworked chino style or the brand’s Staq design for jeans. Jackets were worked in a bomber style with traditional denim jacket details, a motorbike style and a more classic trench coat with a stacked collar.

What does it say about the direction Throup is planning to take with the main G-Star Raw brand? “We’re going to push the research more,” he said. “You have to propose real newness, otherwise, what’s the point? We have to think out of the box and capture the needs of the brand, taking risks but with responsibility.”