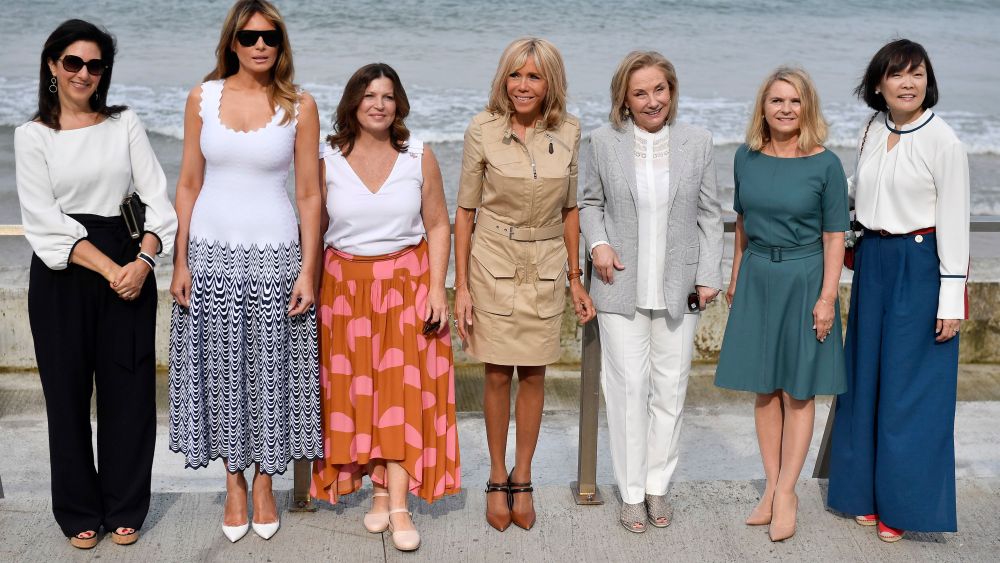 COMING TO AMERICA: With the G7 summit officially wrapped up, the first couple had plenty to mull over abroad Air Force One en route back to U.S. soil. First Lady Melanie Trump kept the easy-breezy resort look going, deplaning In a navy blue blouse and white pants from Michael Kors at Joint Base Andrews. She has worn styles from the American designer on several highly-photographed occasions including one of the events commemorating the 75th anniversary D-day earlier this summer.

For Monday’s final send-off portrait at the G7 in France, the First Lady posed with her female counterparts wearing an Azzedine Alaïa dress from the spring collection. The navy and white combo is a fail-proof standard in Biarritz, France, a seaside escape established by the Old World crowd. While international tourists flock to the French Riviera at this time of year, more discrete travelers are drawn to Biarritz.

Unlike first ladies in recent decades, Trump routinely wears designer pieces purchased at retail through her stylist Hervé Pierre. Several designers have been vocal about not wanting to dress Trump, but that doesn’t mean they have been asked to.

However partial Trump has been to European designers, she wore a few American ones during the G7 summit. Perhaps more a sign of practicality than austerity, she donned two different dresses designed by the since-exited Raf Simons at Calvin Klein. The Chanel jacket Trump wore for Friday’s departure from Joint Base Andrews was another seasons-old item from her closet. FLOTUS showed off dresses from Gucci and Alexander McQueen for the G7’s dressier evening events. As for any hidden meanings in Trump’s G7 ensembles, Pierre has cautioned in the past that social media shouldn’t read too much into the final edit. As Pierre, who also designs the Atelier Caito for Hervé Pierre collection, has said, “Sometimes a dress is just a dress.”

WATCH: An Expert’s Guide To Fall 2019 Fashion From NYFW